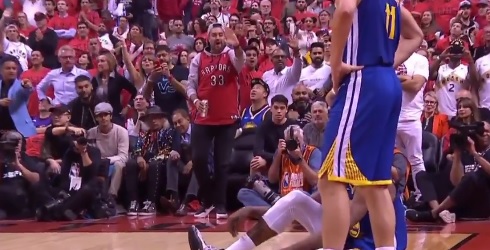 Kevin Durant returned to play in game 5 after getting injured over a month ago.

At first, Durant looked like his normal self until he reinjured his calf’leg in the second quarter and had to be carried off the court.

Kevin Durant being helped going to the locker room pic.twitter.com/83XM6uelYz

Some terrible fans began cheering Kevin Durant’s injury which angered many of the Warriors players.

Every player – Warrior or Raptor – was upset with the cheering when Kevin Durant went down. Props to the Toronto players (and PA guy) to shoot that down. https://t.co/80PoCBfb8w

One Raptors fan was seen waving goodbye to Durant while he was down on the court.

After several Raptors players admonished the crowd, fans began to begin chanting KD and gave Durant a standing ovation as he left the court.

Raptors players were trying to get fans to stop cheering on Durant’s injury 😔😔 (via garms1981/IG) pic.twitter.com/D1mvmxLzpY