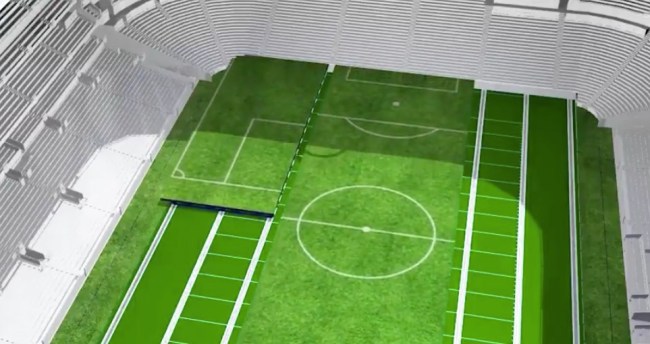 The University of Phoenix Stadium in Arizona made history when it became the world’s first stadium to feature a retractable field. Retractable roofs have become somewhat commonplace worldwide, but retractable fields have yet to really catch on. The Tottenham Hotspurs finished 2nd in England’s Premier League last season, their last ever season played at the White Hart Lane Stadium where the Spurs called home from 1899 to 2017…Yes, you read that right. They played in the same stadium from 1899 to 2017.

The Spurs are playing their games at London’s Wembley Stadium this season while their new stadium is being built, and the team just shared a video of the new field. The new stadium will feature the world’s first dividing retractable pitch/field. Instead of one massive patch of grass being wheeled in and out of the stadium like they have in Phoenix, the Spurs’ new field will slide in and out of the stadium in three sections:

Sure, we might not have flying cars yet but this is pretty fucking futuristic. As a Spurs fan living in America, it also has me pretty stoked to jump across the pond next season to catch a game in the new stadium and witness history being made.