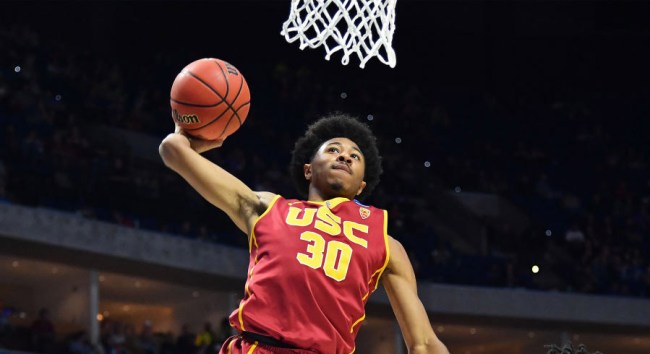 The March Madness takeover of Coiski Media’s series continues, as they follow up the Oregon Ducks basketball tour with another Pac-12 notable, the USC Trojans.

USC, like Oregon, is also a Nike school, and while they may not be as well-stocked as the Ducks, thanks to Phil Knight’s presence in Oregon, the Trojans, as you will see, are doing pretty okay for themselves when it comes to sneakers and gear.

One of the big reasons why USC basketball has such top-of-the-line facilities, other than being a big-time sports college, is that because when NBA teams are in Los Angeles visiting and getting ready to play the Lakers or the Clippers they often hold their practices at USC’s facilities. Just one more perk of going to college in La La Land.

Check out the video below to take a tour of USC Trojans basketball’s professional-level locker rooms, its state-of-the-art weight room facility and its famed arena that faces Downtown Los Angeles.