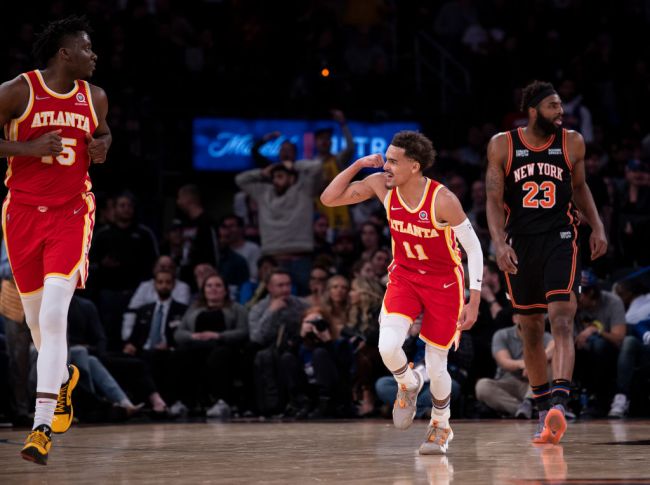 The NBA has almost had something really great happening over the past 10 months. They’ve almost seen a great new rivalry in the league develop in that time. They are even lucky enough that it features one of the league’s biggest markets. There’s just one problem. The potential rivalry is pretty one-sided.

During last season’s NBA playoffs, Trae Young truly began his journey to become the most hated man in New York. He dominated the Knicks as he led the Hawks to a 4-1 series win in the first round of the playoffs, including a 36 point, 9 assist effort at Madison Square Garden in the closeout game.

New York Knicks fans have been hoping for payback at the Garden ever since, but have found no relief. Last night, their struggles continued as Young once against dominated at MSG and he let Knicks fans hear about both during and after the game.

Trae told this heckler to "hold that L” 😂💀

"I couldn't really hear them … It wasn't even that loud" – Trae 😂 pic.twitter.com/r4UkORQD6t

It was another masterful performance from Young at MSG last night. He dropped 45 points on the Knicks while shooting 13-25 from the field and 7-15 from 3. He added 8 assists just for good measure as the Atlanta Hawks beat the Knicks 117-111 after trailing by 9 early in the 4th quarter.

The NBA has to be hoping that the Knicks can fix themselves sometime soon and really build this rivalry. The NBA doesn’t really have many compelling rivalries around the league right now and pitting one of the league’s biggest young stars against the team in one its biggest markets would be pretty great for business.

Trae Young has been doing his part, but now it’s time for the New York Knicks to get themselves back into playoff contention so we can see this rivalry when it really matters.