The First Trailer For The ‘Al Davis Vs. The NFL’ 30 For 30 On ESPN Looks Incredible 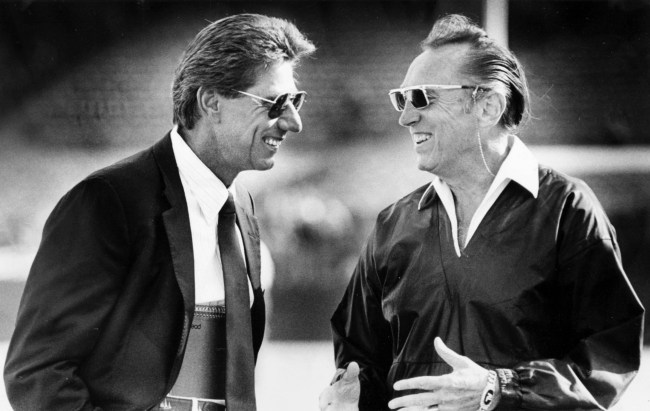 National Football League was the guy with the slicked back hair, sunglasses and whose motto was “Just win, baby.” That man would be the late owner of the Raiders NFL franchise, Al Davis.

In the upcoming “30 For 30” documentary set for a Thursday, Feb. 4 premiere on ESPN, Al Davis vs. the NFL will examine the story of the long-running feud between Raiders owner Al Davis and NFL commissioner Pete Rozelle.

“Over the course of the 101 years of NFL history, no figure had been as divisive as Al Davis and no relationship has been as fraught with tension as that between Davis and former NFL Commissioner Pete Rozelle,” ESPN explains. “Theirs was a civil war that almost tore the NFL apart, but instead, led to the financial dominance and state-of-the-art stadiums of today’s NFL. Sometimes the greatest forms of evolution come through acts of revolution, and no one fought against the status quo more than Al Davis.”

Of that there is no doubt.

Davis was also the first NFL owner to hire a Black head coach (Art Shell), a female chief executive (Amy Trask), and was the second NFL owner to hire a Latino head coach (Tom Flores). He also famously refused to let the Raiders play in any city that required black and white players to stay in separate hotels, back when that was a very real thing.

Oh, Davis also was the Raiders’ head coach from 1963 to 1965 and was the commissioner of the American Football League in 1966, and is the only person to ever serve as an assistant coach, head coach, general manager, commissioner, and owner.

His battles with Pete Rozelle, however, were where he made the most news.

The same year his Raiders won the Super Bowl, Davis filed an antitrust lawsuit so his team could move to Los Angeles.

Davis later returned the Raiders to Oakland, but not before attempting to buy the NBA’s Sacramento Kings and moving the team to the California capital, and suing the NFL once again for allegedly sabotaging his plan to build a stadium at Hollywood Park in Inglewood.

On top of all that, in 1986 when the United States Football League (USFL) sued the NFL on antitrust grounds, Davis was, of course, the only NFL owner who took the side of the upstart football league.

Al Davis vs. The NFL was directed by Ken Rodgers, the VP & Senior Coordinating Producer at NFL Films. Rodgers previously directed four other excellent “30 For 30” documentaries: Deion’s Double Play, The Two Bills, The Four Falls of Buffalo, and Elway to Marino.