No. 1 Recruit Travis Hunter Makes A Big Declaration About His Future Position At Jackson State 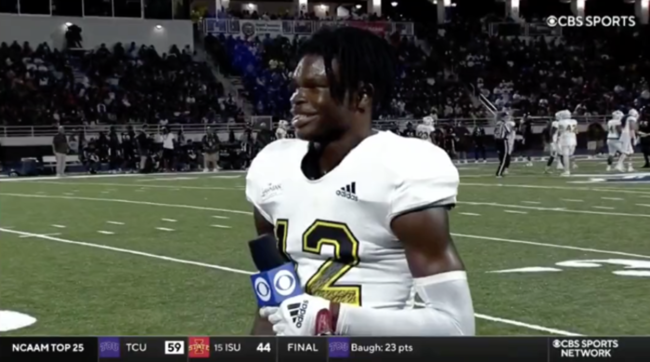 Travis Hunter projects to be a cornerback in the NFL. However, he is one of the most explosive two-way players that has come out of high school in a long time and he plans to keep it that way for as long as he can.

Hunter, who stands 6-foot-1, 165 pounds, was the No. 1 overall recruit in the Class of 2022. After being expected to sign with Florida State, he shook the entire landscape of college football on its head and committed to Jackson State, becoming the highest-ranked player to ever commit to an HBCU or FCS school.

Since then, he has showed off his skills as a defensive back in an All-Star setting and absolutely MOSSED a defender as a pass-catcher.

When Hunter gets to practicing with the Tigers, he will be able to learn the cornerback position from his head coach, Deion Sanders, who was one of (if not the) best cornerback to ever play in the NFL. The expectation is that he will play mostly on the defensive side of the ball, and he has plans to go to the league out of Jackson State.

In the meantime, Hunter has plans to keep getting reps on offense.

The Georgia-native recently spoke with 247 Sports and made a big declaration about his future position at Jackson State. He wants to be a two-way player and play both cornerback and wide receiver for the Tigers, like he did in high school.

Long term, Hunter knows that his future is at corner. Short term, he doesn’t think that anyone can guard him as a receiver.

“I take a lot of pride in playing corner. You have to be really competitive to play corner, and I’m really competitive. I just play receiver because I know I can get open. I don’t think anybody can guard me at receiver.”

Hunter’s plans are, obviously, exactly that. Coach Prime may decide that he doesn’t need his No. 1 overall recruit to play any offense.

But, for now, Hunter wants to do something that most college football players do not and doesn’t want to come out of the game.