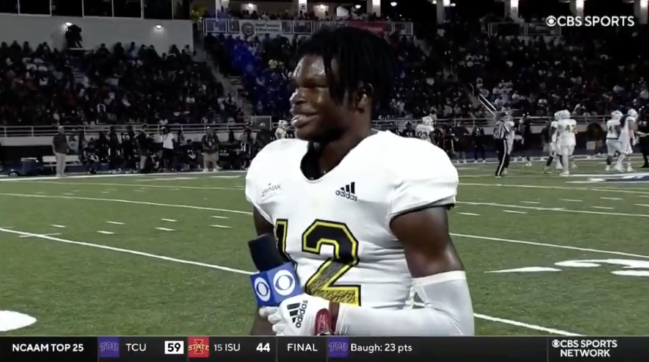 Played each year in Hawaii, the Polynesian Bowl pits some of the top high school football players in the country against each other in an all-star game. This year, it was the nation’s top recruit who stole the show.

Travis Hunter, who sent shockwaves across college football when he committed to Jackson State, absolutely balled out on both sides of the ball. Although it isn’t entirely clear where he will line up in college, he is considered likely to play cornerback like his head coach Deion Sanders.

That doesn’t mean he isn’t a freak wide receiver. He was getting open in practice all week.

⭐️⭐️⭐️⭐️⭐️ Travis Hunter making it look easy at the @polynesiabowl

During the game, he made a massive impact for his team, which was coached by Super Bowl champion and Grambling State legend Doug Williams.

Early in the first quarter, he was lined up on defense at cornerback when he found the ball soaring in his direction. Just inside the end zone, Hunter skied up to pull down a very athletic interception.

After landing with his feet back on the ground and coming down with the INT, the future Jackson State Tiger gave a nod to Coach Prime. Sanders was known for his flashy play and had his own ‘Prime Dance’ celebration.

Hunter broke out his version in Hawaii and it’s pretty spot-on.

Travis Hunter with the pick and Primetime impersonation! #PolynesianBowl pic.twitter.com/ki3b8EVLgo

It was a game-high total and it earned Hunter offensive MVP honors.

At 6-foot-1, 165 pounds, Hunter is a generational athlete. His presence at Jackson State will be an instant boost for the Tigers’ defense.