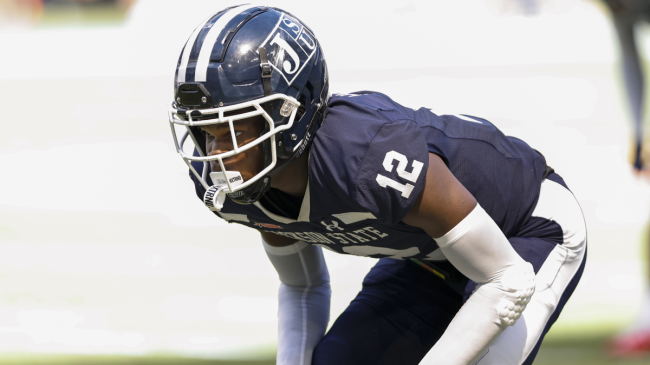 The Colorado Buffaloes might get an immediate upgrade in the secondary based on recent comments from Jackson State defensive back Travis Hunter.

Hunter played for Jackson State last season, mainly on the defensive end. At cornerback, he tallied 11 tackles and a pair of picks while also recording seven pass breakups. He also saw time at receiver, where he hauled in 14 catches for 143 yards and two touchdowns. It was a solid freshman season for a player that made huge waves on the recruiting trail.

Travis Hunter became the first No. 1 overall recruit to sign with an HBCU, a huge win for then coach Deion Sanders. It seems that his stay in Jackson could be short-lived, though. Sanders is off to Boulder, where he’ll take over as head coach at Colorado. Hunter is teasing the idea of joining him and becoming a Buffalo.

While on a livestream of Coach Prime’s opening press conference, Travis Hunter appeared to hint at a potential transfer.

“Tell ’em, coach. You won’t be having that next year.”

Deion Sanders has already said he plans to “bring his own luggage,” essentially telling members on the current Colorado roster to start looking for transfer destinations. That luggage includes his son, Shedeur, who he’s already named as the team’s starting quarterback before even stepping foot on campus.

Landing Hunter would bring even more talent to a program that won just one game last season. Many fans on social media were quick to comment on the possibility of bringing the former top recruit to Boulder.

One person wrote, “Buffs are back,” while another commented, “Might be a PROBLEM brewing in Boulder… It’s going to be exciting!”

Sanders might ruffle some feathers along the way, but it appears he’s on his way to flipping the roster in a single offseason. In Travis Hunter’s case, Coach Prime might have to fight off a familiar foe should the DB ultimately decide to transfer. Hunter was committed to play for Florida State before flipping that pledge to JSU last signing day. The Seminoles would certainly be in play should Hunter leave Jackson.