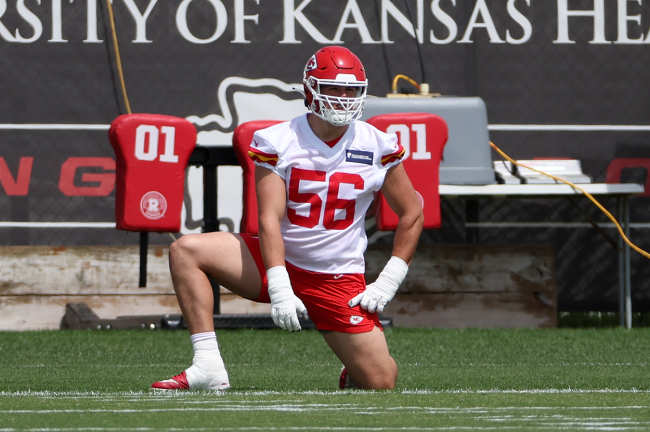 With the No. 30 overall pick in the 2022 NFL Draft, the Kansas City Chiefs drafted defensive end George Karlaftis out of Purdue. The 21-year-old rookie had an incredible Pro Day back in March, ran a freakishly fast 40-yard dash in sub-freezing temperatures, and has a Chipotle order that is truly insane.

Karlaftis, who reported to training camp alongside his veteran counterparts last week, is already becoming a favorite amongst teammates. Frank Clark, who has been in the NFL since 2015, has taken the rookie under his wing as his mentor.

The organization is already extremely high on what Karlaftis could become and it’s not hard to see why. He has the intangibles from a size and athleticism standpoint, and he is willing to put in the work to develop into a dominant pass-rusher in the NFL.

Frank Clark's been mentoring George Karlaftis after most practices. Here's a rep from the rookie. #Chiefs pic.twitter.com/CAsDVDU7aQ

Everything about Karlaftis is promising and he continues to impress the older veterans around him. However, they haven’t quite figured out how to pronounce his name. Well, Travis Kelce hasn’t, at least.

Karlaftis, who was born in Athens, Greece, has a unique last name. And now he has a new nickname, appointed to him by Kelce, who is known to be a joker.

While talking about the Chiefs defensive front, Kelce had high praise for Karlaftis but referred to him as “Karlofugus.”

"We got some dogs up front man…
Especially "Karlofugus” getting in there, throwing his heavy hands around.” 😂

It is unclear as to whether this is a new nickname that was given to the rookie from the veterans and has stuck, or if Kelce was just being Kelce. Either way, the newest Kansas City edge rusher is going to be called Karlofugus for the remainder of his career.