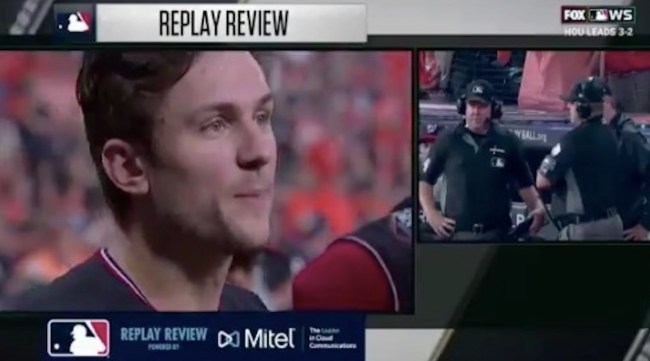 Heading into tonight’s Game 6, you could say that the Washington Nationals’ backs were up against the wall.

After winning the first two games of the World Series in Houston against the mighty Astros, the Nationals went home to Washington D.C. and lost three straight games to the 2017 World Series champions, putting themselves on the brink of heartbreaking elimination.

Not about to go down without a fight, the Nats went into the 7th-inning of Game 6 with a one-run lead when Trea Turner hit a chopper down the third baseline. As the throw to first was made, Turner came in slight contact with the first baseman’s glove and was called out.

Trea Turner was called out on this play.

Trea Turner: “Joe Torre is sitting right there … he’s sitting with his head down trying not to look up.” pic.twitter.com/BM92dbAKGN

But while the Nats ultimately didn’t get the call, in classic ball-don’t-lie fashion, Anthony Rendon smashed a two-run home run to the moon during the next at-bat.

Despite the 5-2 lead, Nationals manager Davey Martinez was far from calm about the previous screw job, as he immediately got into a heated confrontation with the umpires during the middle of the 7th, resulting in his subsequent ejection.

During the 7th inning stretch, Nationals Manager Dave Martinez was visibly upset with the umpires and was ejected during the exchange. pic.twitter.com/AZ23MusrNN

While none of this is necessarily “good for the game”, it’s fantastic for the sport of baseball, as moments of human drama like these are what ultimately fuels our love of sports.

If the Nationals see out tonight’s game, Game 7 will be played tomorrow night in Houston, with former Cy Young winner Zack Greinke set to take the mound for the Astros in the deciding game.