Trea Turner Did The Smoothest Slide You’ll Ever See, Got Turned Into A Glorious Meme 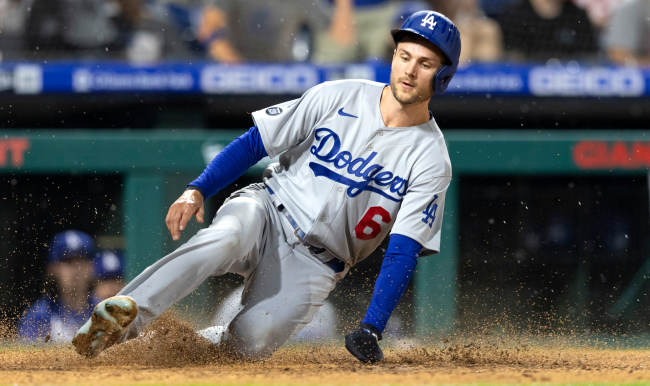 Tuesday night during the Los Angeles Dodgers’ 5-0 win over the Philadelphia Phillies, one run in particular, scored by new L.A. acquisition Trea Turner, stood out far above the rest. Which is saying something since both Corey Seager and Max Muncy hit some sweet dingers.

The reason for that is the ridiculously smooth way that Trea Turner went about sliding into home in the top of the sixth inning, scoring the team’s second run.

Some fans are saying it is the greatest slide in the history of Major League Baseball. And it would be hard to argue that it isn’t.

It appeared almost as if Turner’s slide was something that he’d been, as one of my co-workers put it, “practicing exactly that for 12 straight hours and wanted to get one perfect one before retiring for the day.”

Seriously, if that isn’t the greatest slide in Major League Baseball history, it most certainly it the coolest.

I've been watching this for hours. My favorite part is Trea's insouciant, arm-swinging amble off the field. https://t.co/Uv1thEX9R0

i wish he would’ve moon walked back to the dugout after this😂 https://t.co/LXP4zpxyeM

In a rain-soaked night the #Dodgers rained on the Phillies' parade, 5-0. Check out this beaut - no, not the crusher by #WillSmith, I'm talking about the Cirque du Soleil Ice Capades slide into home by #TreaTurner! #TheMatrix #TheOtherTurner #MLB https://t.co/awayhYu2iq

This might possibly be the most satisfying slide i’ve ever seen in my life pic.twitter.com/OvhvFis8fY

Tons of people on the internet agree that it was fantastic and expressed how impressed they were with Trea Turner’s smooth AF slide as only they can: turning him and his slide into a instant classic of a meme by applying Turner’s slide to other appropriate situations.

If the Fonz played baseball ... https://t.co/vTeZYxbGev

the only way to explain the physics here is that someone pulled a Miss Frizzle and turned off the friction https://t.co/7SnrcMkywy

The Catcher probably heard hee hee on the way by https://t.co/e7HaxaaLP9

After watching Trea Turner’s slide 30 or 40 times now, there are really only two comparisons I can make to it.

Had to do it. pic.twitter.com/sdmkdybKiB