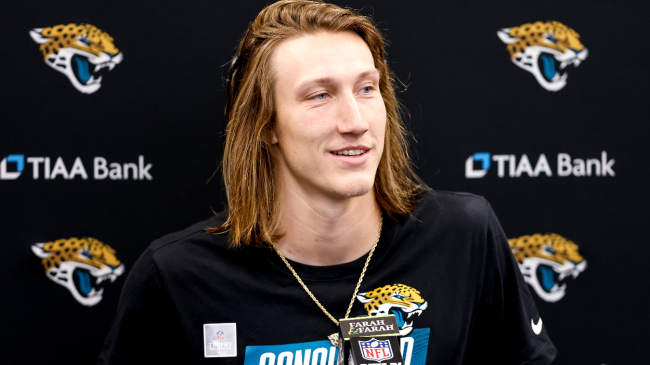 Trevor Lawrence went from zero to hero in the Jaguars’ wildcard playoff win over the Chargers. Jacksonville fell behind 27-0 due to four first half interceptions from the quarterback before storming back for an epic victory.

The Jags pulled out an improbable 31-30 comeback, with their star signal caller throwing a quartet of touchdowns following those picks.

The win kept Jacksonville’s season alive when hope seemed lost. It also gave the organization its first postseason victory since 2017. To commemorate that accomplishment, Lawrence celebrated with a meal for champions.

Videos of the passer began surfacing on social media at the local Waffle House.

Just got sent this from Jacksonville.

He’s immediately become a fan favorite, not only amongst Jags Nations, but for NFL viewers everywhere. Many were quick to post their reactions to the extremely relatable victory celebration.

One person wrote, “And they thought he wanted the NY spotlight. Trevor Lawrence is Duval through and through.”

Another fan commented, “He’s so normal.”

A true man of the people, he seemed to be enjoying his moment. Lawrence also posted a comical message on Twitter after his comeback performance.

He’s certainly right about that. After being outscored 27 to zip over the first 29 minutes of action, Jacksonville was able to storm back with a second half push.

The Jaguars score 31 of the game’s final 34 points, a microcosm of their season as a whole. Lawrence and the Jags struggled out the gates before winning their final five regular season contests to slip into the playoffs. A season-ending victory over the Titans secured the team’s first division title since 2017.

This latest comeback likely sets up a second-round matchup against Patrick Mahomes and the Kansas City Chiefs. An upset in the divisional round will be worthy of another WaHo trip.