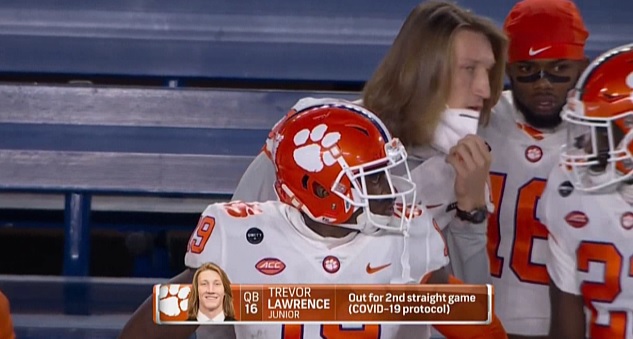 There was an interesting interaction between Trevor Lawrence and one of his teammates on Saturday night.

In the first quarter of the Clemson-Notre Dame game, NBC’s cameras cut to Lawrence, who tested positive for Coronavirus on October 29th and was out after being put on COVID-IR, pulling down his N95 mask to talk to one of his teammates on the sidelines.

Either Trevor Lawrence is too much of a risk to be at the game, or he can play – no in between. Sitting on the sideline pulling his mask off to yell at teammates isn’t saving anyone. pic.twitter.com/p1PS0Url9c

According to ESPN, Lawrence was allowed to be on the sideline after clearing the 10-day isolation protocol but couldn’t play because he has yet to pass the ACC’s required cardiovascular tests.

Apparently he’s had multiple negative tests but per ACC protocol you have to pass a cardiovascular test and he hasn’t been given it yet.

Lawrence will have cleared the 10-day isolation protocol following a positive test for COVID-19 by Thursday, Swinney said, but a battery of cardiovascular tests designed to identify symptoms of myocarditis must also be completed before Lawrence can return to the field, and that won’t be done by Saturday.

“He’s doing great. He’s in the meetings [via Zoom] and all that stuff. He’s just anxious to get out,” Swinney said of his quarterback. “There’s no way to get through that in time to play.”

The ACC’s medical advisory group requires all players who test positive to remain in isolation for a minimum of 10 days, which Swinney suggested would be concluded Thursday for Lawrence. But in order to evaluate for symptoms of myocarditis or other cardiovascular issues, a three-part testing protocol is also in place that Clemson said can take an additional two to three days. In addition, the school employs a “reacclimatization” period of at least two days to ensure players are healthy enough to return to action.

Even though Lawrence has gone through the 10-day isolation protocol it’s not a good look for him to be seen on camera pulling down his mask to talk to his teammates.