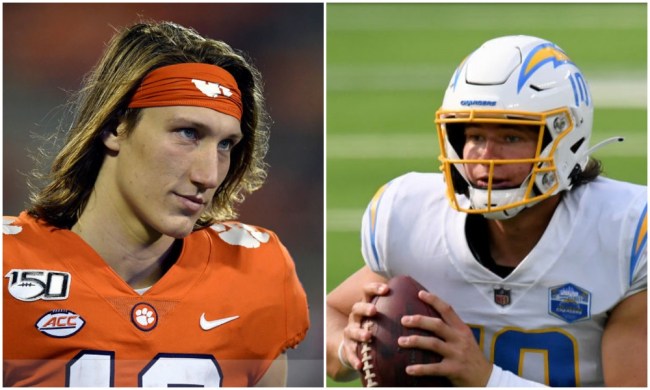 Trevor Lawrence has been considered ‘the guy’ for years now, ever since he took over as the starting quarterback at Clemson. Seeing as how he threw for over 10,000 yards, won a national championship as a true freshman, and his only two losses in college came during the College Football Playoff, the hype around Lawrence certainly hasn’t gone anywhere. He’s a lock to go No. 1 overall to the Jaguars in the 2021 NFL Draft.

With April’s draft right around the corner, we’ve officially hit comparison season as NFL analysts and media members will compare Lawrence to just about every quarterback around the league over the coming weeks. One name that’s frequently popped up as a comparable for Lawrence is Chargers quarterback Justin Herbert.

The two have similar measurements and have cannons for arms, so the comparisons are well-warranted, but between the two, who gets the nod as the better quarterback? According to NFL Films’ Greg Cosell, he thinks Herbert trumps Lawrence because, in his eyes, Herbert is more physically gifted.

“To me, Herbert is a big, big-time talent. He’s a bigger man than Trevor Lawrence. He’s an easier thrower. Lawrence obviously have a very, very good arm. I would argue that Herbert’s arm is naturally more powerful, but Lawrence has no issues with arm strength.  I think (Justin) Herbert is more purely physically-gifted than Trevor Lawrence,” Cosell explained during an appearance on Colin Cowherd’s ‘The Volume’ podcast.

Herbert had a stellar rookie season after being thrown into the starter role when one of the team’s doctors accidentally punctured Tyrod Taylor’s lung while administrating a pain-killing shot. It wasn’t how Herbert or the Chargers drew it up, but it worked out pretty well as the former Oregon star was the 2020 NFL Offensive Rookie of The Year.

Herbert threw for over 4,300 yards to go along with 31 touchdowns and a 66.6 percent completion percentage as a rookie.