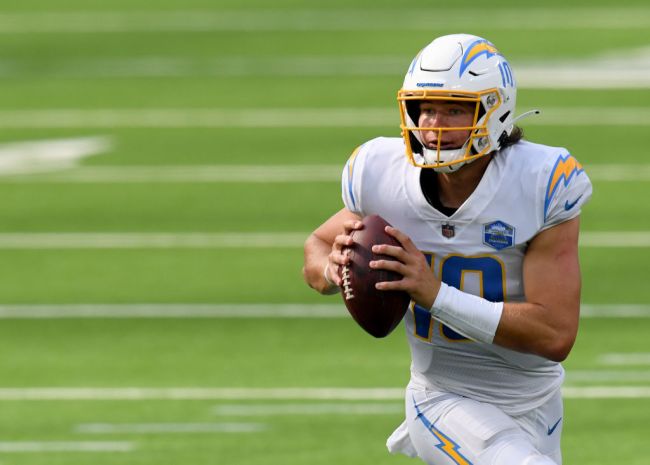 There may not be a player in the history of the NFL that has had a more unique introduction into the league than Justin Herbert. The rookie out of Oregon was expected to be Tyrod Taylor’s backup for the Chargers’ season opener against the Chiefs, but one of the team’s doctors accidentally punctured Taylor’s lung while administrating a pain-killing shot to his ribs just before kickoff.

Nothing like finding out your starting against the defending Super Bowl champs moments before kickoff because your team’s starting quarterback now has a hole in his lung. Talk about being thrown into the fire.

Herbert joined ‘The Pat McAfee Show’ on Thursday and the former NFL punter asked simply asked him what his thoughts were heading into kickoff. Herbert went on to describe the minutes leading up to the game, finding out he was going to be starting under center, and how one teammate hilarious reacted when he walked into the huddle for the first time.

“We’re about to receive the kick and I’m yelling ‘let’s go offense, let’s go,'” Herbert explained. “I didn’t have my helmet, wasn’t warmed up and coach Lynn comes up and goes ‘you’re in, Justin.’ I didn’t know if this was a plan all along and they just kept it hidden from me.”

“I just had the biggest smile on my face and I go up to the huddle and Hunter Henry is like ‘what are you doing out here?’ and I was like, ‘right before this, that’s what you’re going to tell me?'”

"I go out to the huddle & @Hunter_Henry84 is like what are you doing out here?"#Chargers QB Justin Herbert tells us about going into his 1st NFL game against the #Chiefs #PatMcAfeeshowLIVE pic.twitter.com/W5YpKzQmc6

Henry was caught off guard just like the rest of the NFL world was when Herbert was given the nod against the Chiefs, but Herbert was able to put together quite the performance with 302 passing yards, three touchdowns, and zero interceptions in a 23-20 overtime loss. The game was a preview of what was to come for Herbert in 2020; he threw for over 4,300 yards and tossed 31 touchdowns during his rookie campaign.

Talk about an all-time story Herbert can now tell.

‘Yeah, our team doctor stuck a needle thru our starting QB’s lung, so I had to find my helmet and start the game. We almost beat the Chiefs, they won the Super Bowl the year prior. I threw for 300 yards and three tuddies, no biggie.’