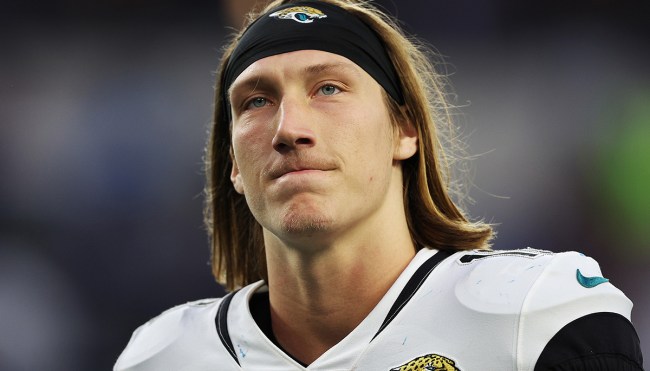 Three of today’s starting rookie quarterbacks were taken in the first round of the 2021 NFL Draft. One is excelling while the other two continue to struggle.

Mac Jones has filled in admirably under center as he attempts to guide the Patriots back to the playoffs for the first time without Tom Brady. He’s thrown 18 touchdown passes on the season, leading New England to nine wins in his inaugural campaign.

Trevor Lawrence and Zach Wilson, the top two picks, have not seen the same success.

On Sunday, CBS Sports flashed a stat that sums up the difference in production, particularly when comparing Jones and No. 1 overall choice Lawrence. Take a look.

The post comes in the middle of a matchup between the Jaguars and Patriots. New England has jumped out to a 50-3 lead with Jones tossing a trio of touchdown passes. His counterpart, Lawrence, has gone in the opposite direction with three interceptions to this point.

Folks took to social media to discuss the difference in play between these two national championship winning signal callers.

He’s got better hair though. https://t.co/d5lspQJgeU

While the production has been one-sided, some are quick to defend Lawrence’s situation in comparison to that of Jones. One joined an organization that’s a couple of years removed from dynasty status. The other landed on a two-win team that just fired its head coach midseason.

One plays for the Patriots and one of the greatest head coaches of all-time, the other plays for the Jaguars, whose head coach got fired for tomfoolery: https://t.co/MEQxTo9Y1X

Jones was placed in a position to win more quickly, but his impact on his team to this point has been inarguable. He’s improved as the season wears on while others have failed to show growth. Most of the frustration and criticism surrounding Lawrence doesn’t revolve around wins and losses, but more around the fact that his play continues to suffer despite receiving more and more experience.

This after an offseason where he was dubbed a generational talent.

Someone just broke through the rookie wall pic.twitter.com/aNprqjZ67b

Trevor Lawrence over his last 9 starts

There’s obviously a lot of time before we can crown a champion regarding who will have the better career. It’s safe to say Jones has a leg up early in the race, though.