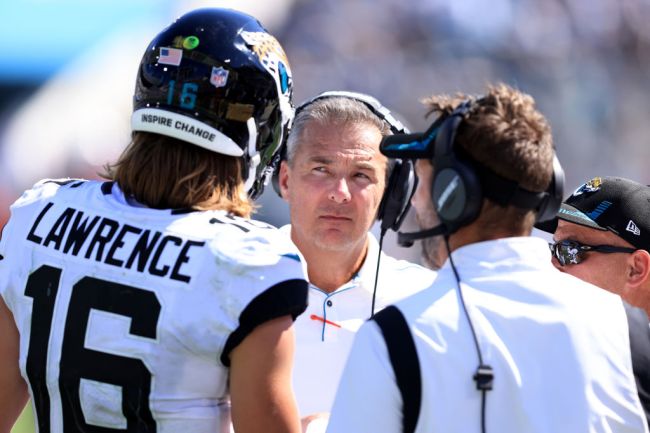 The Jacksonville Jaguars lost their 20th game in a row on Sunday and it appears that the coach and the star QB aren’t seeing eye to eye on certain aspects of the game.

In the fourth quarter of the Jags-Titans game on Sunday, Meyer decided to run the ball on 4th and 1 with Carlos Hyde instead of opting for a QB sneak which didn’t sit well with fans when the Jags were stopped at the goal line.

Titans stop the Jaguars on 4th and goal. pic.twitter.com/k7FH9mNRwb

Carlos Hyde getting the ball on 4th-and-goal at a critical juncture in the game is yet another fireable offense, Urban Meyer.

Darrell Bevell and Urban Meyer, what is going on from the 4th and inch line… what in the world is going on? 6 foot 6 qb and no sneak. No James Robinson in the game who is averaging 8.4 yards per carry today.

Meyer was asked about the play and he revealed that Lawrence wasn’t comfortable with running the QB sneak just yet, so they opted for the run instead.

Urban Meyer on why no QB sneak for Trevor Lawrence from the six-inch line? "He’s not quite comfortable with that yet. I know that might sound silly, but if you’ve never done it, it’s something that we need to keep [working on] so that we can make that call in that situation."

Lawrence immediately disagreed with Meyer’s comments when asked about them minutes later.

It’s not a good sign when the coach and QB are both throwing each other under the bus immediately after a loss.