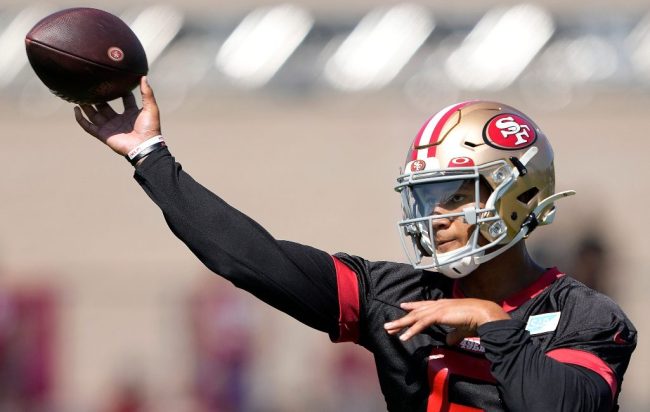 Hype season is in full effect for the San Francisco 49ers as they have major Super Bowl hopes in mind. The coaching staff is officially moving on from Jimmy Garoppolo and is giving Trey Lance the reigns. Many believe this kid is the real deal, as USA Today claims Lance gives San Francisco a “potential Super Bowl payoff.” However, there is one key factor that could prevent the team from reaching success with the young quarterback under center.

During an episode of Undisputed, co-host Shannon Sharpe shared some valid criticism of Trey Lance. Sure, the kid has all of the talent in the world, there is no question about that. However, his level of experience is extremely minimal. Sharpe explains it perfectly in the video below.

"I don't believe it pays off this year. After 17 college games, to say this guy is ready to step in and take this team that's built to go contend for a title…I just don't see it." — @ShannonSharpe pic.twitter.com/Ta83V9g3Hs

Since 2020, Trey Lance has only started three games. One with his college team then just two with the 49ers last season. His lack of experience is a legitimate concern, especially considering the front office is going all-in on their young quarterback.

It’s a move that does make sense considering the 49ers moved up in the 2021 NFL Draft to take Lance third overall. He’s spent a full year behind Garoppolo and did have a couple of opportunities to take the starting job last year. However, he wasn’t able to do so, which allowed the coaching staff to continue developing him. In all, it’s a risky move for this organization as Trey Lance has a minimal amount of experience playing quarterback.

We’ll see how it plays out, but this is something to take note of. His talent makes him a unique prospect, especially with this roster built nicely around him. Keep an eye on Trey Lance as his production will make or break the 49ers’ Super Bowl hopes.