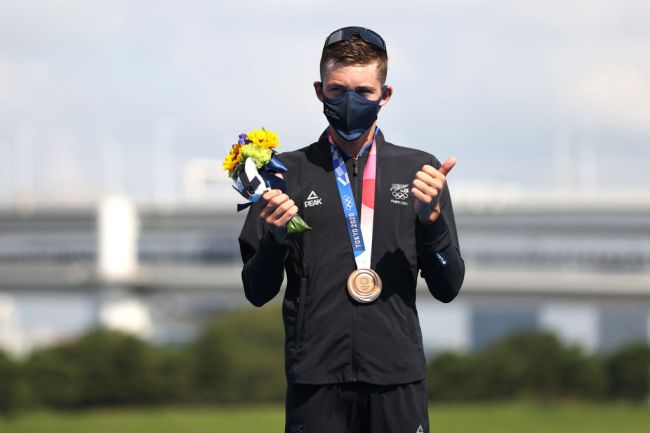 Hayden Wilde was in 37th after the opening swim leg in the men’s triathlon on day three of the Tokyo Olympics, but he made up serious ground in the cycling and running leg of the competition to finish in third place. Wilde won the bronze medal, becoming New Zealand’s first Olympic triathlon medal since Bevan Docherty finished in third at the 2008 Beijing Games.

The 23-year-old burst into tears shortly after crossing the finish line of the race.

But he may not be the only one crying over his Olympic accomplishment. An ex-girlfriend might be crying tears of regret after breaking up with Wilde.

New Zealand media company 1 News was interviewing Hayden Wilde’s friends and family in his hometown of Whakatāne. That is where they spoke to a young woman who said she was Wilde’s ex-girlfriend.

“I’m so proud of Hayden, all the work he’s obviously done to get there is amazing,” she told the news network. “I went to primary school with him and he’s grown so much and I’m real proud.”

Then she made an announcement about having some second thoughts about dumping the Olympic medalist.

“I regret breaking up with you,” she revealed.

However, Wilde wasn’t thinking about his former flame whatsoever after his incredible finish at the 2020 Olympic Games.

“I think I’ll just be calling my girlfriend, who’s actually in Spain at the moment,” Wilde said. “She was up in the early hours of the morning watching the race.”

Wilde has a few days of recovery before he competes in the mixed team relay on Saturday.

“I regret breaking up with you!”