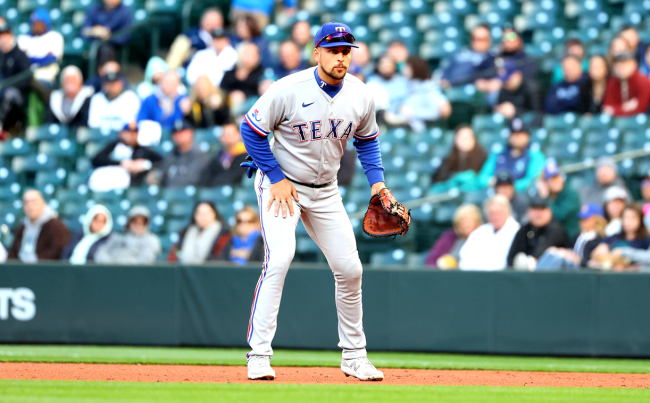 There have been only 729 triple plays in Major League Baseball history. That’s not very many when you consider that there have been over 200,000 games played since they started keeping track in the late 1800s.

Very few of them, however, were easier than the triple play that was pulled off by the Texas Rangers versus the Seattle Mariners on Wednesday.

Things got off to a pretty poor start for the Rangers in the first inning. Adam Frazier led off with a walk for the Mariners. Then Ty France lined a single to left field off Rangers pitcher Dane Dunning. So the Mariners already had two men on base with no outs after just two batters with newly acquired slugger Jesse Winker coming to the dish.

After working the count to 3-3, Winker did what he does and hit a scalding line drive that surely would score at least one run.

Which it would have, had it not been hit directly at Rangers first baseman Nathaniel Lowe who snagged the sinking liner, jogged to first base, touched the bag for out number two, then tossed the ball to shortstop Corey Seager for the third out because Frazier was just standing on third base.

Lowe probably could have just ran the ball over to second base and completed just the 16th unassisted triple play in Major League Baseball history if he had just thought about it. Regardless, he now forever has a place in Rangers lore as it was just the team’s seventh in the history of the franchise.

“Instantly, I knew it was a triple play,” Jesse Winker said after the game. “It was weird because it was one of those that may have looked like it bounced and you see that play happen every once in a while, and yeah, triple play.”

Baseball fans, always appreciative of history being made – it was just the 40th time in MLB history a 3-3-6 triple play was made – loved how easy this particular one was made… kind of.

That was the least cool triple play in history

Wow, that was underwhelming.

I am unreasonably mad that we missed out on an unassisted triple play. https://t.co/VfK6juetoR

What the hell just happened?