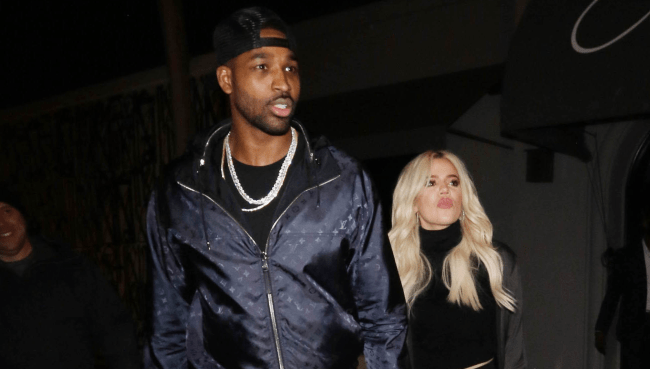 NBA player Tristan Thompson, who recently reconciled with his wife Khloe Kardashian, has found himself once again the subject of another cheating scandal.

Just weeks after being accused of hooking up with an Instagram model, Thompson is now being linked to three women at a party.

According to a report from the Daily Mail, Thompson went into a bedroom with three women at a party and later resurfaced looking “disheveled.”

Tristan Thompson disappeared into a bedroom with three women during a Bel Air birthday party – and emerged ‘disheveled’ 30 minutes later, DailyMail.com can reveal.

The Boston Celtics star’s antics came on Friday night – less than 24 hours after he was photographed with on-off girlfriend Khloe Kardashian and their daughter True, three, for the first time in two months.

Sources exclusively told DailyMail.com that Thompson, 30, headed straight for the bar after arriving at the party just after midnight and did a round of ultra-luxurious Deleon tequila shots while swigging Moet champagne before repeatedly grabbing the bottom of a female guest.

Two hours later, he was seen making his way to a bedroom in the Bel Air mansion where the party was held accompanied by three women and a male friend.

Thompson emerged from the room 30 minutes later with his dark red shirt crumpled and looking ‘a mess’ and returned to the bar.

The latest accusations made against Thompson come less than 24 hours after Khloe told Andy Cohen that she felt she could trust Tristan despite all the rumors about his constant cheating.

“I mean, I definitely trust him as a friend and all those things, but I’m not someone that, you know, when I need to find out everything comes my way,” she said. “I just have to trust … I just need to focus on today and go day by day. I can’t worry too much about everything else.”

“I know all the help that he’s got and the constant efforts that he makes every single day and how hard he fought to get back with me currently,” “I mean you can ask everyone, it really wasn’t an easy thing for him, but I don’t know why someone would go through all of that if they weren’t really serious.”

Considering Thompson has been involved in numerous cheating scandals over the years, people on the Internet couldn’t help but make jokes about the latest accusations.

This man won’t have to play basketball another day in his life if he created a 30 for 30 of himself last couple years https://t.co/sIJeINzzGl

He is 6’10 dating someone from one of the most famous families in the world doing this lmao https://t.co/ahSJOuvG5g

When Tristan Thompson doesn't cheat on Khloé for a week pic.twitter.com/bMRffczgnO