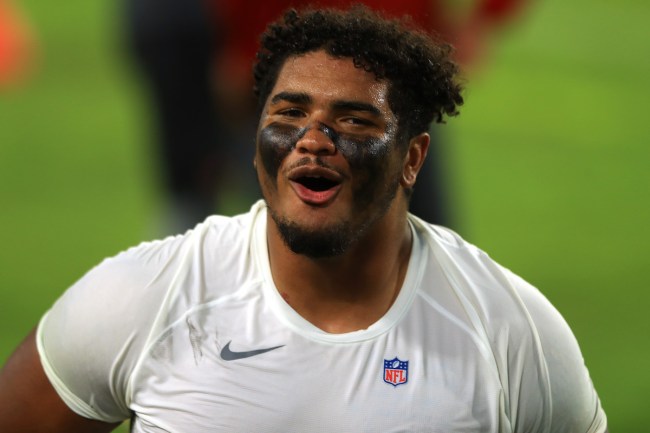 When the Buccaneers drafted Tristan Wirfs No. 13 overall in the 2020 NFL Draft, the 22-year-old offensive lineman instantly had a tall task in front of him. That’s because the former Iowa product wasn’t just about to start his NFL career, but he was doing so by protecting the greatest quarterback of all-time, Tom Brady. Talk about just a little bit of pressure, right?

After Brady left the New England Patriots to join the Buccaneers last offseason, the entire expectation level changed for the franchise. The team was no longer hoping to just reach the playoffs, but with the GOAT onboard, it was Super Bowl 55 or bust. While the team has reached its destination — although the job isn’t yet complete — that doesn’t mean there wasn’t a steep learning curve for some of the players.

One of those guys was Tristan Wirfs, who recently talked about his initial reaction after the Bucs selected him last spring. While the behemoth of a man was excited, he admitted to Pro Football Talk on Thursday that he was also “scared” because he ignored an Instagram DM from Brady the night Tampa Bay picked up in the draft. If that wasn’t bad enough, the pressure from his new head coach, Bruce Arians, didn’t exactly ease the lineman’s mind.

“The very first thing was he messaged me on Instagram,” Wirfs said Thursday. “I didn’t open it for like nine hours because it was draft night and so I had a ton of messages and I didn’t see it until the next day. And I was like, ‘Oh my gosh.’ I was scared.”

Brady apparently didn’t take much offense. But that wasn’t the first time Wirfs was a little overwhelmed at the prospect of playing with Brady when Bruce Arians brought it up on draft night. “It was a lot of emotions that night, just because, it’s Tom Brady, you know? BA on the phone call was like, ‘Are you ready to protect Tom?’ I was like, ‘Not right now,’” Wirfs recalled with a laugh.

“It was just a lot being thrown on me, just those couple words, I was like, ‘Wow.’ And I was like, ‘I’ll get ready as fast as I can.’ But it was still exciting. Exciting, emotional — it was just awesome. There was a lot going on that night.”

Luckily, Tom Brady wasn’t too upset with Tristan Wirfs ignoring his message on the night of the NFL Draft, and the lineman ended up going out and balling all season long for the Buccaneers — well, except for that one time against Khalil Mack. With Super Bowl 55 just a few days away, Tampa Bay’s going to need one more solid performance from their rookie.

As for the first time Wirfs actually met Brady, well, let’s just say he did what most of us would’ve done: He completely went full fanboy.

“The first time I met him was in the hallway at the facility. We were getting our physicals,” Wirfs said. “He was coming around the corner, I was coming around the other way. And I almost bumped into him and I did a double take. I was like, wait a minute — you’re Tom Brady. It was cool. I called my mom right after and told her I met him.”

Hey, look, Brady’s old enough to be Tristan Wirfs’ dad and is a friggin’ icon, so I’ve got no problem with the kid being a little starstruck when meeting the GOAT for the first time. But the lineman was quick to lose that admiration and focus on protecting his quarterback from getting walloped by defenders all season long — which he’s done pretty damn well all season long.