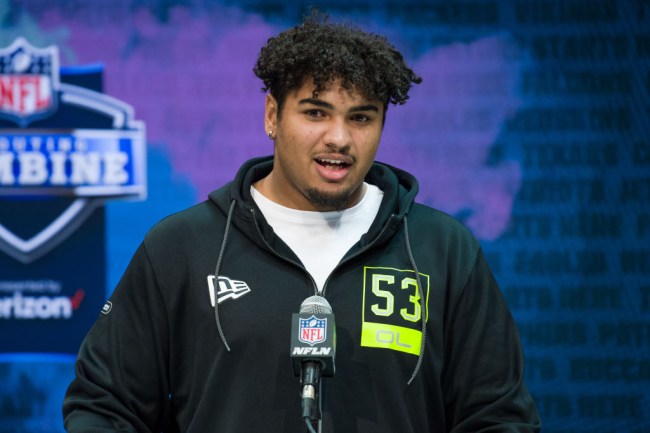 Tampa Bay traded up in the first round of the 2020 NFL Draft to select Tristan Wirfs with the 13th overall pick. Plenty of mock drafts had Wirfs as a Top 3 offensive tackle in the class, so seeing him essentially fall right into Tom Brady and the Bucs’ laps as the fourth offensive tackle taken was surprising.

However, prior to becoming an offensive lineman in the NFL and a teammate of the greatest QB of all time, Wirfs was a wrestler.

Not only did the 21-year-old play his college football at Iowa, but he is also from the state and in case you didn’t know, wrestling is sort of a big deal around Iowa. Wirfs is a large human at 6-foot-5, 320 lbs and wrestled in the 285 weight class at Mount Vernon High School. It’s safe to assume that, with his athleticism and size, he didn’t lose often and actually went on to win a state title his senior year, but again this is high school wrestling in the state of Iowa we’re talking about here.

After being selected by Tampa Bay, a photo made the rounds on Twitter of Wirfs wrestling a guy much, much shorter than him that, let’s just say, doesn’t appear to have the same athletic abilities as Wirfs. The shorter guy won, there’s video proof of it happening here.

The other guy won the match pic.twitter.com/R7xih6DNsf

There is no denying that the photo is absolutely unbelievable, but it turns out the shorter guy is Aaron Costello and he’s a monster of a wrestler. Beyond the fact that he’s 5-foot-11 and took out a 6-foot-5 Wirfs, he has plenty of other accolades as well.

Costello wrestles for Iowa now, a program that’s won 23 national titles since 1975. You don’t just go to Iowa to wrestle, that’s like saying I’m just going to go to Alabama to play football.

It’s a tough look for Wirfs given his size and the fact he’s a soon to be starting offensive lineman in the NFL, but that’s no slouch he got pinned by back in the day.