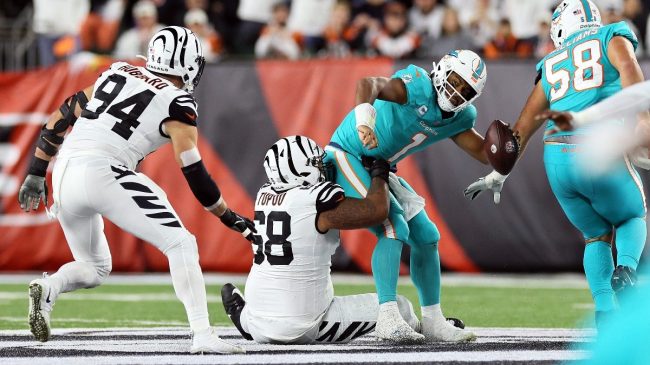 All eyes have been on the Miami Dolphins lately all due to their handling of Tua Tagovailoa. He suffered a scary concussion injury during Thursday Night Football that rocked the NFL world to its core. Now, the young quarterback has received an official update about his injury status.

According to Josina Anderson, Dolphins head coach Mike McDaniel has announced that his star quarterback is ruled out against the New York Jets. This shouldn’t come as a surprise to anyone. Tua Tagovailoa suffered a scary injury before fully recovering from his previous concussion in Week 3.

#Dolphins HC Mike McDaniel announces Tua Tagovailoa will be OUT vs. the #Jets. Tua is still in the concussion protocol.

With the NFLPA investigating the Dolphins, Miami finally makes the right call for Tagovailoa. It’s unclear exactly how long he will be ruled out. However, based on what we’ve seen the last two weeks, it wouldn’t be surprising if Tua Tagovailoa misses several games.

Concussions are nothing to play around with as they have serious long-term effects on the human brain. The Dolphins are likely to closely monitor Tua Tagovailoa for once, which will be a nice change of pace for this organization.

Teddy Bridgewater will fill in as the Dolphins’ starting quarterback for now. We may see him under center for a bit, as Tua Tagovailoa must overcome his head injury 100 percent. Until then, Miami will run its offense through Bridgewater as the team aims to remain at the top of the AFC East.

Keep your eyes peeled for more information, as the NFLPA continues its investigation of the Dolphins. Hopefully, Tagovailoa can make a full recovery and get back to playing football. However, his health is the top priority. As it should have been from the beginning.