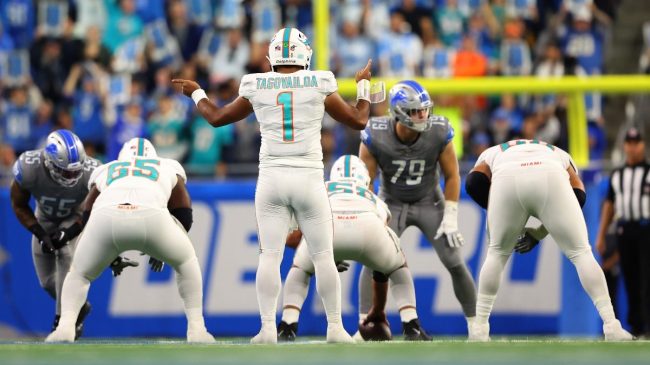 The Miami Dolphins held off the Detroit Lions for a big win on Sunday, moving the team to a 5-3 record on the year. Tua Tagovailoa was on a tear, as he put up a monster statline to help his team earn a big win. His performance was soo great, that Tagovailoa broke a franchise record that not even Dan Marino ever accomplished.

According to  NFL on CBS, the Dolphins quarterback played so well that he broke a franchise record. As it turns out, Tua Tagovailoa is the first player in team history to record 350 passing yards, three passing touchdowns, 0 interceptions, and an 80% completion percentage in a single game.

Only one QB in Dolphins history has a game with

And it’s not Dan Marino pic.twitter.com/hHEPGAtajf

Surprisingly enough, Dan Marino never recorded a game quite like that. That’s wild to think about considering he’s all over the NFL record books. This might just be another example that Marino truly would have thrived in today’s era. However, this also sheds light on the fact that Tua Tagovailoa is a solid quarterback for the Dolphins.

Miami has been phenomenal for this franchise this year. Although there are still concussion concerns surrounding him, Tagovailoa is playing as a legitimate starting quarterback in the NFL. The Dolphins are at their best when he’s under center and hopefully, he can remain there for quite some time.

Look for Tua Tagovailoa to continue his hot streak in Week 9 when Miami takes on the Chicago Bears.