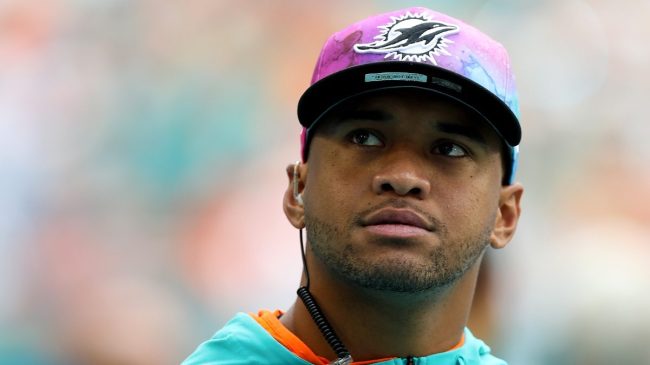 It’s been several weeks since Tua Tagovailoa has played football all due to the scary concussion he suffered against the Cincinnati Bengals. The Miami Dolphins quarterback is hopeful to take back his starting job soon. In the meantime, Tagovailoa details his experience suffering the head injury.

According to Joe Schad, the Dolphins quarterback admits he lost consciousness after the hit. In fact, Tua Tagovailoa claims he remembers “the entire night up until the point I got tackled.” After that, the rest of the evening was a bit choppy.

There was a point I was unconscious. I remember the entire night up until the point I got tackled. I don’t remember being carted off. I do remember some things from the ambulance and the hospital. – Tua pic.twitter.com/TgImx1G9Ls

This is a rather scary incident to have to live through. Especially considering Tagovailoa doesn’t even remember getting carted off of the field. He was laying on the ground for a good while before the Dolphins carted him out. That’s a long time to be unconscious and we’re just glad that Tua Tagovailoa is okay now.

The NFL has been under fire over concussion issues for years. However, this injury Tua Tagovailoa suffered is one of the worst ones we’ve seen in a while. Many are concerned about his long-term health while some believe he should call it a career. After hearing his story, it’s hard to argue against those people.

Hopefully, the Dolphins can keep Tua Tagovailoa safe from now on. Miami has an interesting matchup with the Pittsburgh Steelers. We’ll see how it plays out, but all eyes will be on the third-year quarterback. We just hope he doesn’t suffer another head injury, as it could be detrimental to his health.