Per Report, Tua Tagovailoa’s Family Really Doesn’t Want To See Him Drafted By The Lions 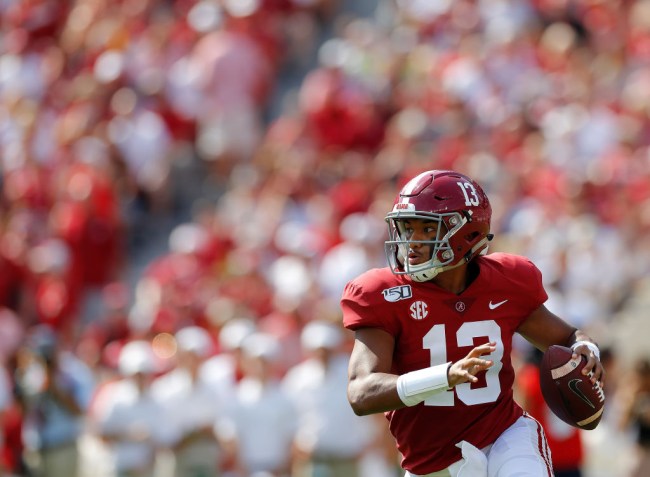 Tua Tagovailoa won’t be the first quarterback selected during April’s NFL Draft thanks to Joe Burrow, but he’ll likely be the second quarterback off the board. While it’s nearly a guarantee Burrow will go No. 1 overall to the Bengals, it’s a little unclear as to where the former Alabama quarterback will take his talents at the next level.

The Redskins have the No. 2 pick in the Draft and are set at quarterback, but the Lions have the No. 3 pick and that’s where things could get interesting for Tagovailoa. Matthew Stafford will turn 32-years-old in just a few days and perhaps Detroit could be looking to the future, so taking Tagovailoa could make sense.

The Giants have the No. 4 pick and won’t take a quarterback and most people are just assuming Tagovailoa will be sitting there for the Dolphins to snag with the No. 5 pick. While that’s maybe the most likely outcome, the Lions do have a say in all of this.

For Tagovailoa’s family, however, it sure sounds like they don’t want to see Tua be taken by Detroit.

According to the Miami Herald, sources close to Tagovailoas say the Alabama quarterback would love for the Dolphins to trade up to No. 3 to select him. Those same sources say they don’t love the idea of Detroit actually picking Tua because of the arc of that team’s current coaching situation.

The Lions will be playing their third season under Matt Patricia in 2020. He has a 9-22-1 record his first two seasons and the Tagovailoas are concerned another poor season could force the Lions to fire Patricia — putting the quarterback in the uncertain 2021 situation of being a draft pick the new coach didn’t make.

And this: The Tagovailoas would love to come to the Dolphins.

April 23rd can’t get here soon enough because those first five picks in the NFL Draft sure could be interesting.