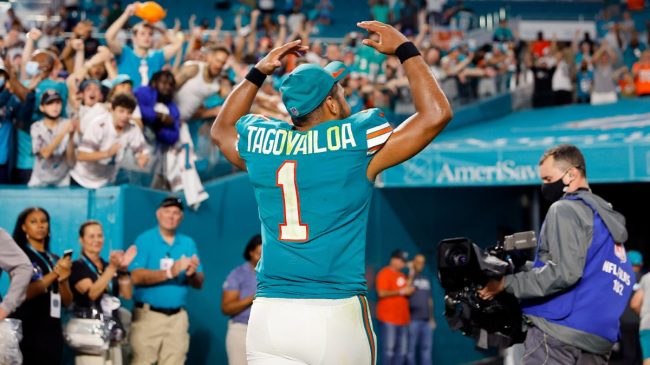 The Tyreek Hill trade is having a huge impact on the NFL.

The football world was taken by storm by the news that the star wideout would be moving on from Kansas City to join the Dolphins. Patrick Mahomes and the Chiefs now lose their top playmaker in the passing game, while Miami adds to its already speedy skill position cupboard.

He and Jaylen Waddle are being talked about as the being the fastest wide receiving duo in NFL history.

While the trade made major headlines, it may not have as much of an effect as you might think in the Super Bowl race. One major sportsbook saw no change in the odds for either the Dolphins or the Chiefs following the deal.

There has been some movement on another front, however.

Miami QB Tua Tagovailoa has seen a massive bump in his MVP odds after adding Tyreek Hill to his list of offensive weapons. Tagovailoa was an afterthought in the MVP race before the deal. Now, he’s slowly sneaking up the leaderboard.

He’s still a ways from the top, but Tagovailoa’s now entered the top 25 candidates at DraftKings. He’s seen a jump across the board, soaring as high as 40/1 at WynnBET.

Most books had the left-handed passer from anywhere between 150/1 and 175/1 prior to the trade.

We’ll see if Tagovailoa can capitalize on his new weapon. If so, he and Miami could be in for a special year.