The Tyreek Hill Deal Had No Impact On Chiefs, Dolphins’ Super Bowl Odds According To One Sportsbook 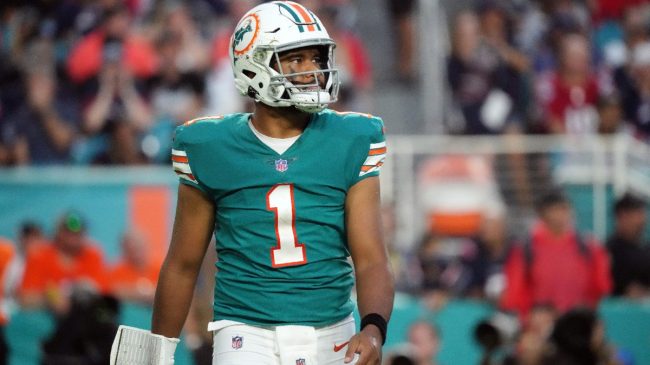 Wednesday gave us a blockbuster deal on the NFL market.

Super Bowl contenders Kansas City opted to trade one of their most lethal weapons in Tyreek Hill to Miami. The new extension makes Hill the highest paid wide receiver in the NFL, while also making the Dolphins the fastest offense in the league.

Miami will certainly benefit from the addition as it gives QB Tua Tagovailoa another option in the passing attack. Miami now boasts the tag team of Hill and Jaylen Waddle, while having RB Raheem Mostert in the backfield. It could be one of the more explosive groups in the AFC.

As for Kansas City, they’re losing some explosiveness.

Hill was QB Patrick Mahomes’s favorite target last year and had tallied four different 1,000-yard seasons with the Chiefs. An over-the-top threat, he was an impossible matchup for opposing defenses.

While the deal does seemingly make one side immediately better while taking something away from the other, one Vegas sportsbook doesn’t believe it will make a difference in next year’s Super Bowl race.

The Chiefs entered this offseason as a Super Bowl favorite, and for good reason. This is an organization that’s been in four straight AFC Championships. They recently won Super Bowl LIV before finishing as runner-up the following year. They’ve been the cream of the crop in a very difficult AFC West division, and they should be in the running for another title appearance.

Miami, on the other hand, came in as a Super Bowl longshot. The Dolphins haven’t made a playoff appearance in five seasons. They haven’t won a postseason game since 2000. That’s the second-longest drought in the NFL.

Apparently, this recent deal has no effect on either side.

It’s odd not to see any movement on either side, but then again, non-quarterback trades have less of an impact on Super Bowl contention.

The Chiefs still have Patrick Mahomes, and I don’t think anyone is ready to dub the Dolphins as Super Bowl contenders. They may not even win their division with the Bills and Patriots looming.

We’ll see how these odds play out over the upcoming season, but this stat makes the trade seem a little less impactful.