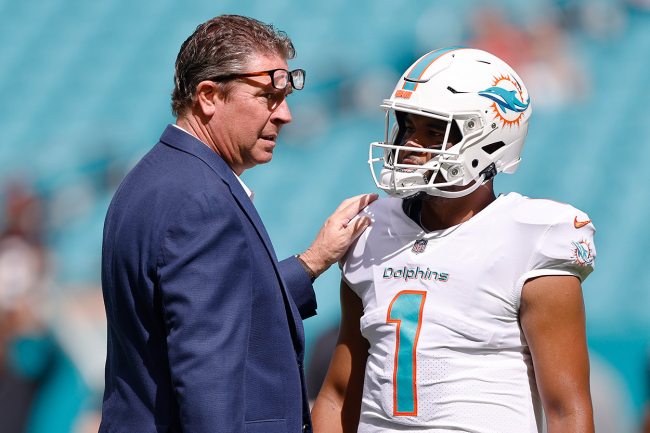 Dolphins quarterback Tua Tagovailoa teamed up with the Big Brothers Big Sisters of Miami and Broward counties for a charity event over the weekend. The second annual ‘Luau with Tua’ raised over $25,000 for the two organizations and brought out some big names.

The party began on Saturday evening at the Seminole Hard Rock Hotel and Casino. Guests enjoyed an evening of live entertainment, a taste of Hawaiian culture and exquisite Polynesian food.

Among those in attendance were Miami wide receiver Jaylen Waddle and pass rusher Jaelan Phillips. They were having a blast.

Head coach Mike McDaniel was also at the event and even he got in on the action.

And for fun – here’s a minute of Mike McDaniel learning to properly play the drums. Safe to say he is embracing the Polynesian culture this evening 🥁 #Dolphins pic.twitter.com/jj4q1mvB4m

Also in attendance was one of the greatest NFL quarterbacks of all-time and a Dolphins legend— Dan Marino. Tagovailoa was in the middle of an interview when Marino walked in.

Even though he plays the same position for the same team, the 24-year-old was still quite a bit star struck by the legend’s arrival. Tagovailoa’s reaction to Marino is priceless, especially considering that it didn’t seem like he even invited the legend. It seemed like Marino just showed up on his own accord.

Tua is literally all of us seeing Dan Marino😂😂😂 pic.twitter.com/KQkmcb61Ex

The two Dolphins quarterbacks took a photo together and the younger of the two could not help but smile from ear to ear.

The second-annual ‘Luau with Tua’ even was a success and it looked like a lot of fun for all those involved.

Considering the amount of money raised, it really couldn’t have gone any better!