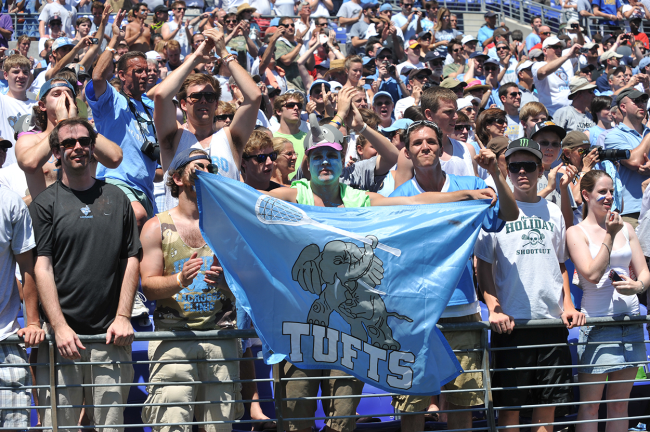 Tufts University men’s lacrosse is on an absolute tear. The Jumbos — one of the best mascots in college sports — are 6-0 through their first six games and putting an absolute beatdown on everybody.

Here is how things have gone so far:

The Jumbos have been absolutely dominant. While their goal-scoring abilities are obviously at the forefront of their success, as are their new uniforms.

The new uniform sets from @TuftsLacrosse today are a LOOK. pic.twitter.com/dB3GqMESCN

In addition, the bench mob plays a huge role.

There are very few, if any, bench mobs who are as lit as Tufts lax. They have choreographed celebrations for certain situations and are just overall super hype at all times.

Among the top Tufts lacrosse bench mob celebrations are:

A Lynchburg lacrosse fan, who somehow doesn’t know what Tufts is and recently watched her team get absolutely gobsmacked, took a video of the Jumbos’ bench mob doing there thing and it is absolutely awesome. Take a look:

They were more entertaining than the actual game tbh. #lacrosse #tuftsuniversity

♬ Blow the Whistle – Too $hort

Tufts still has nine regular season games before the postseason, but none of their upcoming opponents appear to have the ability to take them down. If the Jumbos can keep this momentum rolling, they’re going to be the hottest team in the nation come tournament time and their bench mob is set to see new levels of excitement.

Get on the Tufts lacrosse bandwagon now before it’s too late!