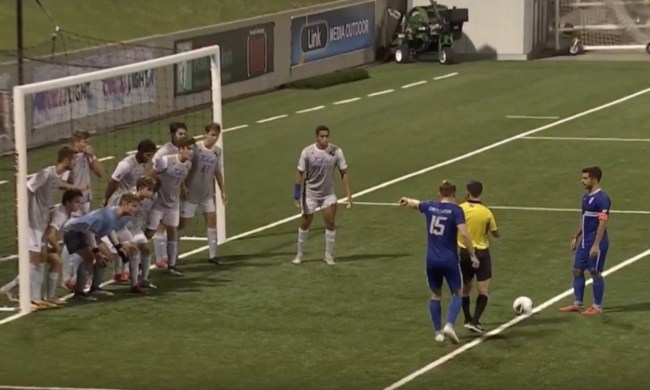 But! If you were to then show me a picture of all 11 players on the opposing team standing in the goal and pretty much blocking every inch of available space then I’d believe that there was no shot in hell someone other than Lionel Messi could put it in the net without punching the ball so hard into someone’s gut that person keeled over and they smashed the follow-up in.

Here’s what led to this bizarre goal. It was the second period of extra time in a 3-3 game and the Tulsa goalkeeper illegally picked up a backpass from one of his teammates which led to the indirect free-kick, meaning the person who touched the ball first couldn’t fire on the net but he could nudge it to another player.

Tulsa stacked the entire team in front of the net but that wasn’t enough to stop this screamer from finding the back of the net. Frankly, this seems like more of a Freshmen Hazing Ritual™ than a goal but this was all legit and it happened in an NCAA game (via For The Win):

Here’s the YouTube version with full highlights of the game. That goal comes after the 6-minute mark in this video so you can skip ahead or watch a full rundown of the game’s action:

Hit me up on Twitter at @casspa if any of you readers out there come across clips like this and think they should be featured here on BroBible. I’m always looking to feature more clips like this because outside of Football and Basketball, most college sports don’t get the representation they deserve.