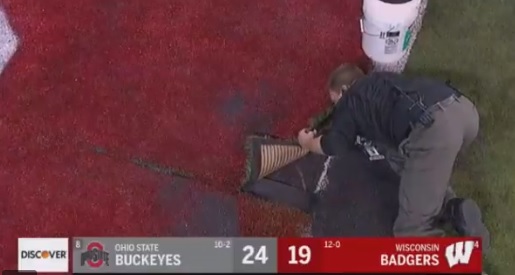 Not all heroes wear capes.

Early in the fourth quarter of tonight’s Wisconsin-Ohio State championship game, Badgers running back Chris James ran in for a 1-yard touchdown to bring his team within five points against Ohio State. During his touchdown run, James and the other players on the field managed to rip apart turf near the end zone.

The game was stopped and one man was ushered out to fix the problem. With all the pressure in the world, Lucas Oil Stadium Field Manager Eric Harlow came out and put in some work.

The turf master putting in work. Hope the Big 10 gives himself a little extra pay for his trouble. pic.twitter.com/dNuIJIvOm7

After about 15 minutes the game was back on and Harlow left the field to a standing ovation from the Lucas Oil crowd.

Harlow quickly become an Internet sensation and was shown plenty of love for hustling down and fixing the turf despite all the pressure put on him.

He was previously a groundskeeper for the Phillies & Nationals. pic.twitter.com/RO2ZiFnWmK

Eric Harlow (aka the field turf fixing guy) is the MVP of the #Big10Championship . Ladies get you a man that can fix turf like this guy 👌🏼👌🏼👌🏼👌🏼 pic.twitter.com/lgg891Qn4F

Eric Marlow, you are a true friend to the crown. Dilly Dilly my friend.

Eric Harlow is most definitely a bro and hopefully the Big 10 gives him a special bonus for the hard work he put in tonight to get the game back on track despite the garbage field he had to work with. Someone better get him a better after the game as well.