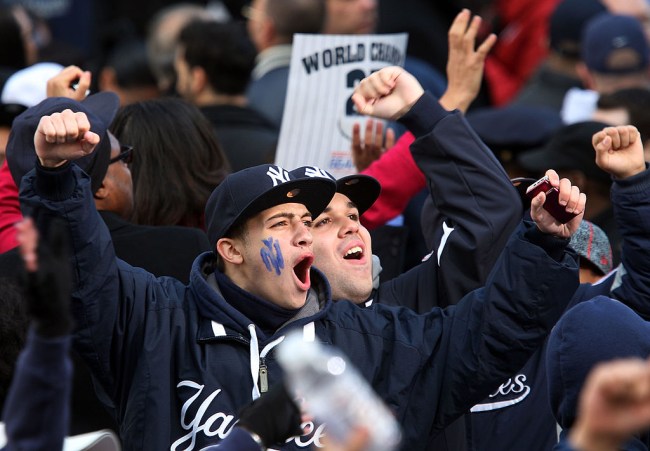 I grew up in a part of Connecticut that was essentially no man’s land when it came to pledging your allegiance to a sports team, and while I can’t tell you exactly when or why it happened, I decided my loyalties would lie with the city of Boston.

Before you judge me, I’d like to note I came to this conclusion at some point in the mid-90s. The Patriots had never won a Super Bowl, the Bruins hadn’t brought home a Stanley Cup since Bobby Orr scored the most legendary goal of all time, and fucking Antoine Walker was the best player on the Celtics.

However, none of those teams caused me more agony than the Red Sox, who hadn’t won a World Series since the Titanic sunk. What made it even worse was the fact that I was surrounded by Yankees fans who had an embarrassment of riches as far as championships were concerned and weren’t shy about letting you know about it.

As a result, I’ll always have a deep-seated hatred for fans of the Bronx Bombers, and while Massholes may now have a reputation for being the worst sports fans in the country, I would beg to differ as far as baseball is concerned—as would Minnesota Twins pitcher Tyler Duffey.

During this year’s ALDS, the reliever took the mound a couple of times at Yankee Stadium and found himself on the receiving end of plenty of insults as well as some overpriced beer he said was thrown in his direction.

He spoke with The Athletic to elaborate on his experience, saying:

“Someone told me they were going to do something to my wife while we were in New York. They take full advantage of whatever they paid for that ticket and they get their full money’s worth.”

Class out the ass.

Sure, every team has their fair share of toxic fans but it’s worth noting the numbers back up my and Duffey’s feelings, as a recent survey confirmed Yankees supporters make up the most insufferable fanbase in the country.