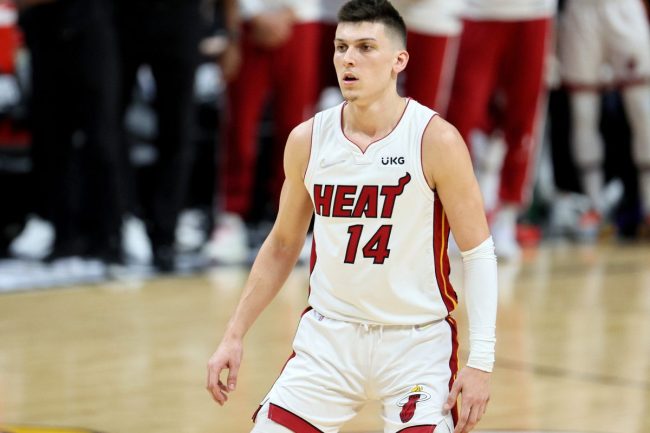 Tyler Herro was the focus of trade talks in Miami this offseason. Most recently, he was linked to a potential deal sending him to Utah for star guard Donovan Mitchell.

Many fans hoped a deal could get done, and they vocalized their desire to get rid of Herro on social media.

Those trade talks fell through, though, and Spida has since been dealt to the Cleveland Cavaliers. Now, Herro is throwing some shade at those fans that wanted him gone.

Despite averaging more than 20 points per game last year in Miami, some supporters trashed the guard for his playoff performance. Now, it looks like they’ll have another season with the sharpshooter in South Beach.

While Herro got his chance to jab at those doubters on social media, he didn’t appear to win any more fans over with the comment.

After seeing Herro’s Twitter post, many fans responded with slights at the Heat guard. Take a look at the immediate reaction on social media.

Many quickly pointed out that performance in the postseason last year, as Miami lost in the Conference Finals to Boston.

One fan said, “How about you keep that same energy in the playoffs? You didn’t even show up yet you saying to mention you with Luka and Trae.”

How about you keep that same energy in the playoffs? You didn't even show up yet you saying to mention you with Luka and Trae.

Another Heat fan sang that same tune, writing, “Keep that same energy & actually show up in the playoffs like you do with the regular season instead of dropping 3 points on a Atlanta Hawks defense.”

This Miami supporter hopes that Herro uses the criticism as motivation, posting, “Come on bro, prove them wrong. Revenge tour.”

If Herro can have the same type of regular season as he did in 2022, followed up with a solid performance in the playoffs, these doubters will soon forget all about their previous desires to get rid of the guard.