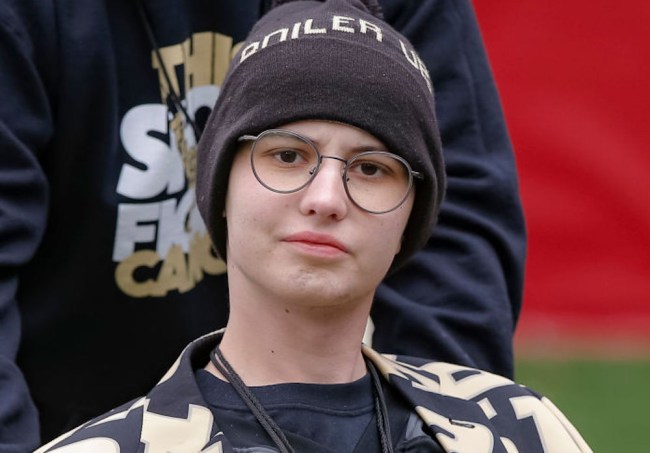 There aren’t many things most people in the world have the same opinion about but I’d argue “Fuck cancer” is probably one of the rare things everyone can agree on.

Every year, close to 600,000 people in the United States succumb to cancer and virtually everyone has been impacted by the disease in some way— even if you’ve never personally known someone who’s battled it.

Earlier this year, ESPN‘s Tom Rinaldi continued his mission to make the world cry with inspirational stories when he highlighted the case of Tyler Trent, a former Purdue student who was forced to withdraw from the university this fall after being diagnosed with terminal bone cancer.

Trent had battled cancer for a number of years before going back into remission and being placed in hospice care a few months ago. However, he remained a die-hard Boilermakers supporter to the very end.

In October, he made the trek to a suite in Ross-Ade Stadium when his team pulled off the upset of the year after trouncing the (at the time) No. 2 Ohio State in October and was invited into the locker room after the game to speak to the team.

Trent also served as the honorary captain at this year’s Music City Bowl on December 28th, which would turn out to be the final Purdue game he’d attend after his family announced he’d passed away on Tuesday.

It’s with the deepest sorrow that we have to say goodbye to @theTylerTrent. We have all become #TylerStrong. To his family, words can’t express how sorry we are that he has passed. His life May have been short, but his legacy with be forever. pic.twitter.com/rONp00YoeK

“He still wanted to help people. He was just a really genuine human being.”

People around the world of sports also took a moment to pay tribute— including Scott Van Pelt, who had an empty seat in his honor on the set of SportsCenter after hearing the news.

"I promised I'd save you a chair. We did." – @notthefakeSVP pic.twitter.com/DinJe5lkCm

He was far from the only person to remember his legacy.

"There are a lot of kids like me who no one will ever know," @theTylerTrent told me. "I don't want there to be any more of them. I want to play a part in ending all of this." Why Tyler kept fighting terminal cancer. https://t.co/BJRaJQdTb7

As the saying goes, “life is not measured by the number of breaths you take, but by the moments that take your breath away.”

Tyler Trent. You have done more in the last year of your life and have touched more people than most will ever touch in more years on earth.

The warm emotions of calling a Rose Bowl… and then to hear news of Tyler Trent’s passing. Thank you, Tyler and the Trent family for giving millions the gift of your bravery and relentless spirit. I will never forget you or that magical night in West Lafayette. Be at peace.

Rest easy @theTylerTrent… You made the world a better place. You inspired millions. And we were all very lucky to be in your presence… Cheers to a life that made a real difference #TylerStrong pic.twitter.com/qVS4Gi7OK8