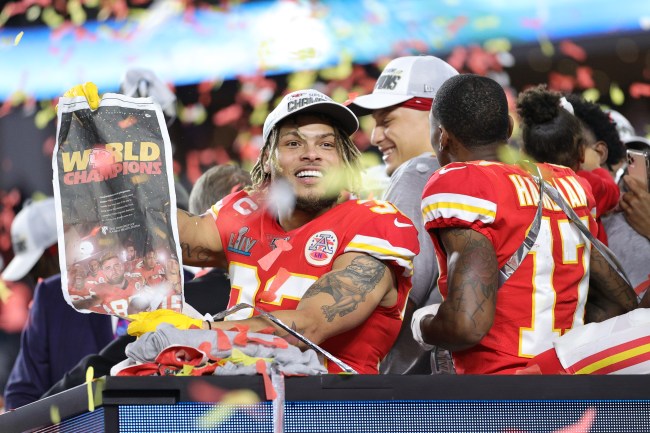 Tyrann Mathieu, by every metric outside of God Given Ability, should not be a Super Bowl champion.

It’s nearly impossible for me and my muffin top to try feel how fulfilling winning a Super Bowl would be, but I’d have to imagine it’s a bit sweeter for the Honey Badger knowing the journey was arduous and dark and deep.

“I’m a warrior,” Mathieu said in a 2016 interview how he was able to survive a life of carnage. “I’ve lived through a lot — and it couldn’t kill me.”

Before the biggest game of his life, Mathieu gathered his men and delivered a pre-war speech that is best delivered by someone who knows a thing or two about battling and conquering and repeating.

In pursuit to be remembered, @Mathieu_Era delivered a Super Bowl pregame speech for the ages 🔥@Chiefs | #MondayMotivation pic.twitter.com/DBS9n1qDcp

Just hours after his team scored 21 unanswered points to win his first Super Bowl, Mathieu wasn’t thinking about his next drink or sexual intercourse with a consenting female, he was thinking about a man inside the Hunts Correctional Facility in St. Gabriel, Louisiana who will never be free again.

Can’t wait till my dad call me from prison. I know they turnt in their. It’s 321 TVs in Hunts Correctional facility & I know every last TV was on The Game & everybody in their was rooting for us. We did it!

Sometimes respect is a choice, and sometimes it’s demanded.

Tyrann Mathieu went from being raised poor by his grandparents, the son of a murderer with a drug addict mother, to getting kicked out of college for something as silly as weed, to super bowl champion. This kid deserves it. pic.twitter.com/IDcXMlZkcj