Tyreek Hill Makes Eye-Opening Claim About His Relationship With The Chiefs, Respect, And Money 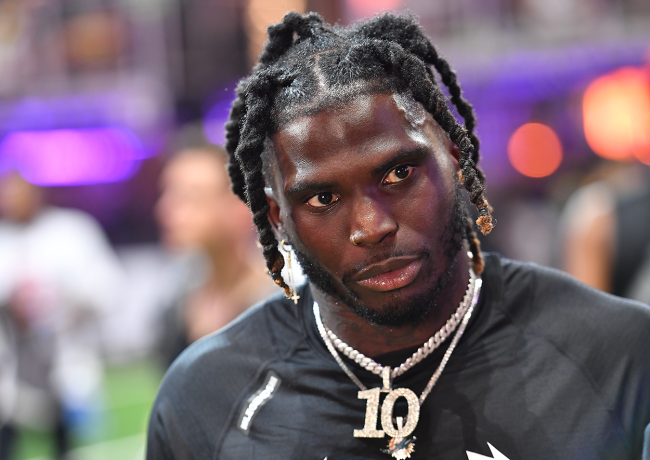 One of the biggest moves of the NFL offseason came between Miami and Kansas City. After spending the first five years of his career with the Chiefs, speedy wide receiver Tyreek Hill was traded to the Dolphins.

A large part of the decision reportedly came down to money. Hill, who would have been in the last year of a three-year, $54 million contract with Kansas City this fall, wanted to get paid. He wanted a contract extension that paid him equal or greater to the top receivers across the league.

The Chiefs were reportedly unwilling to meet Hill at his number, did not want to pay him such a significant amount, and decided to deal him south before he became a free agent and sought after more money on the open market. Upon his arrival in Miami, Hill signed a four-year extension that guarantees him the equivalent of his last contract with Kansas City and could be worth up to $120 million.

The new contract guarantees that Hill will be a member of the Dolphins through the 2026 season, barring unforeseen circumstance. It was a large price to pay, but it gives Tua Tagovailoa a superstar pass-catcher in an offense that struggled last year.

There is a lot of hype around Hill and Miami, and he is glad to be there and glad to get paid.

However, in the debut episode of his podcast ‘It Needed To Be Said,’ Tyreek Hill made a significant claim about his relationship with the Kansas City Chiefs.

During an interview with his agent Drew Rosenhaus, Hill said that he wanted to stay in Kansas City. He says that he never demanded a trade.

His agent then says that Hill tried to sign an extension with the Chiefs before he was traded. Hill goes on to agree with the notion that it was not a situation where he demanded a crazy amount of money.

In addition, Rosenhaus says that he and Hill felt as though the wide receiver was not used in the way that he should have been.

“We felt that Tyreek was underutilized and wasn’t fully appreciated and that they really weren’t taking full advantage of all his ability and talent,” Rosenhaus said.

“Tyreek is a trooper. He never made a peep about it.”

“Never went to the media,” Hill chimed in.

Hill also spoke about how he asked the Chiefs to get him more touches.

“I don’t mean to talk or be a diva in some situation but ayy can I see the pill some time, please? Can I get the ball please?”

Hill said that he spoke with Chiefs head coach Andy Reid about missing some practice before the season as his grandfather had prostate cancer surgery.

“They didn’t even want me to leave to go see my granddad.”

He also said the he cares most about the respect he receives from his employer.

“I don’t care about notoriety.”

“All I care about is respect in the building.”

“I want the head coach to know that on Sundays, that defenses fear Tyreek Hill.”

“The head coach [Andy Reid] do know that,” Hill said. “He know that without the Cheetah on the field, ‘Pat you gon have a long day today.’”

“Sometimes I just want people to be like ‘Tyreek, that’s him.’”

Now, Hill and Rosenhaus did preface the conversation. They both said that the Chiefs were nothing but great to them and that he loves everyone within the organization. However, they also took the time to air their grievances.

“If teams are gonna give us favorable one-on-one matches against their best corner, I don’t see why teams don’t utilize their best receiver. That’s where probably me and the Chiefs fell apart right there,” Hill said.

Drew Rosenhaus also talked about how the financial side of things went down with Kansas City in regard to Tyreek Hill’s contract.

According to Rosenhause, he told Chiefs general manager Brett Veach that he expected Hill to receive a deal similar to that of Davante Adams’ five-year, $141.25 million contract.

“If they didn’t wanna do that type of deal then we would get them a blockbuster trade. I flat out told them that I felt like I could talk to teams around the league and bring great compensation,” Rosenhaus said. “I think the Chiefs initially wanted to challenge us and see what we could get from other teams contractually.”

“Brett Veach was like, we don’t see you as a $25 million receiver, but we’re going to try and get as many picks as we can up out of you,” Hill said.

In the end, Hill said that that it was not about being the highest-paid player in the league. He said that it was about making enough money to make sure his family was secure and that he wanted to be compensated properly for his role.

“They did not value him to the same extent that Miami and the [New York] Jets did.”