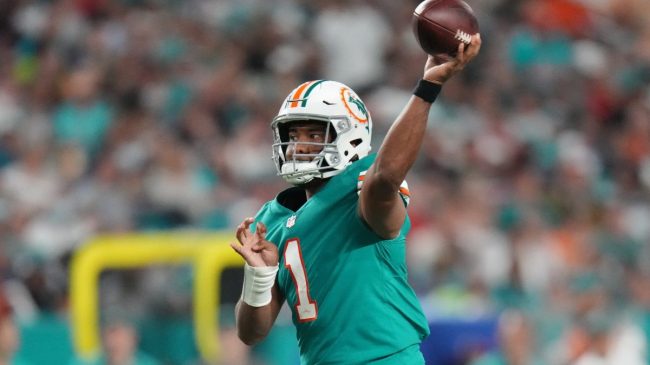 Tua Tagovailoa’s arm strength has been widely discussed over the offseason with many questioning whether the passer has what it takes to help Miami get to the next level.

The former Alabama star has been ridiculed for his trouble throwing the deep ball, a topic that only garnered more attention with the addition of wideout Tyreek Hill.

Hill, one of the league’s most impressive pass catchers, comes to South Beach from Kansas City where he played with an absolute gunslinger in Patrick Mahomes. Nicknamed “The Cheetah,” Hill is also one of the fastest players in the NFL.

Now, the question that keeps arising is, will he be able to get the ball to Hill and the rest of his speedy playmakers consistently? The first look at the Tua-Tyreek connection backfired as the quarterback severely underthrew his intended target on a deep route in practice.

While fans are still hesitant, Hill has come out in support of his new passer. He’s said time and time again that the response to the video was an overreaction, and that Tagovailoa can effectively get the ball in the hands of his targets.

Earlier this week, Hill was again asked about his quarterback’s arm strength, but his comments don’t instill much confidence.

“He can actually throw the ball better than a lot of people actually think.”

Hill was asked about Tagovailoa in an interview, but his endorsement wasn’t necessarily glowing.

While Hill was attempting to show love to his new teammate, the response didn’t come off as confident as he’d wanted.

Fans were quick to pick apart the comments.

Red flag when you say actually more than once

Use of the word “actually” twice seems a bit sus.
No one says Tyreek is “actually” pretty fast.

We’ll see if Tagovailoa can quiet the naysayers in the upcoming season.