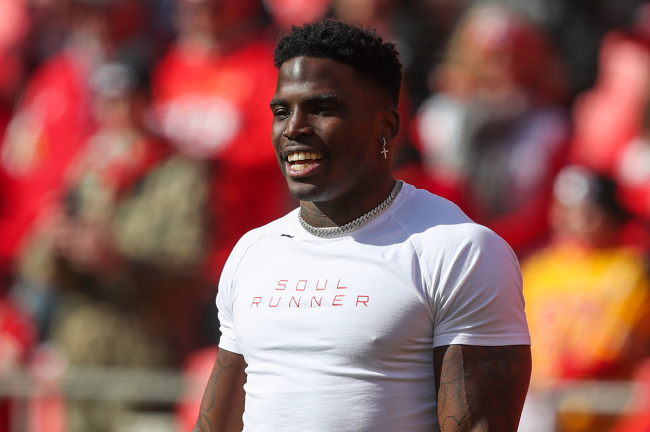 The 2022 NFL offseason has been the craziest offseason of all-time. After a multitude of massive deals for various quarterbacks across the league and huge contracts for players on both sides of the ball, Kansas City and Miami shook things up even more on Wednesday.

First, a report surfaced that Tyreek Hill was granted permission to seek a trade from the Chiefs. Then, just a few hours later, Hill was on his way to the Dolphins in exchange for a lot of draft picks.

Before one of the NFL’s fastest players was sent from Missouri to Florida, there were reports that he was considering the Big Apple. For just a few moments, Jets fans had hope that their franchise could receive a potentially organization-changing player.

And then their hopes were dashed. Tyreek Hill was traded to Miami, not New York.

During his introductory press conference with his new team on Thursday, Hill kicked the Jets while they were down. Before the media session began, the 28-year-old receiver had the room laughing after a quick bathroom break.

The Tyreek Hill press conference started off in hilarious fashion.

It was Hill’s turn to get to the podium after Terron Armstead.

He said: “I ain’t even goin’ cap, I gotta use the restroom.”

Then when he returned a few moments later said: “Quick baby, cheetah.” pic.twitter.com/QkIq2jABGV

And then he went on to discuss his potential trade destinations and it didn’t sound like he was particularly close to playing for Gang Green.

When he was asked how close he was to picking the Jets, Hill put them in a body bag and said, “who?” He then went on to explain that he always knew that he was going to pick the Dolphins.

Doesn't sound like @cheetah was even close to picking the #Jets after all. pic.twitter.com/uyHYRWiW3c

Hill didn’t have to do the Jets like that, but he did. Absolutely vicious.