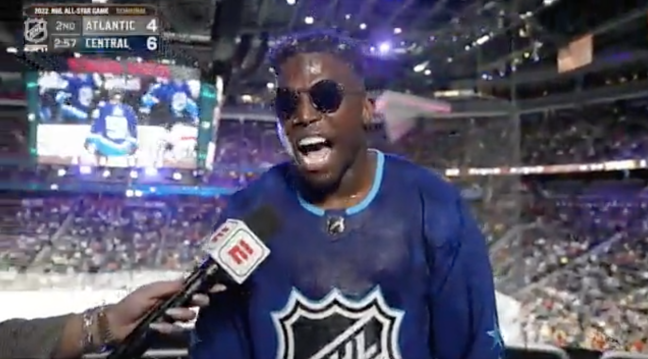 Tyreek Hill had himself quite the weekend. The 27-year-old Kansas City Chiefs wide receiver is in Las Vegas for the Pro Bowl and is having a lot of fun.

Not only did he compete in the NFL Skills Challenge on Thursday, but he has made his way around the city before the game on Sunday evening.

As part of his tour around Sin City, Hill swung by the NHL All-Star game on Saturday. ESPN found him in the arena and Laura Rutledge went up to get an interview.

It lead to two viral moments.

First, he called out Usain Bolt and challenged him to a race. Bolt ended up putting Hill in a body bag on Twitter after his on-air remarks.

After hollering at the former world’s fastest man, Hill tried to do the beer smash made most famous by ‘Stone Cold’ Steve Austin.

However, Hill failed miserably. The goal is to drink two beers at once, but Hill drank no beers at once and ended up absolutely soaked.

All but maybe — maybe — one or two drops of Bud heavy poured out of the beer and onto Hill’s face, neck and body. Not into his mouth.

I don't think Tyreek Hill got an ounce of beer 🤣 @cheetah pic.twitter.com/Mcr7w1wN52

Hill’s TV appearance at the NHL All-Star game did not go as planned. He was put in a body bag on Twitter by Bolt, absolutely drenched himself in beer, and didn’t even get a single sip.