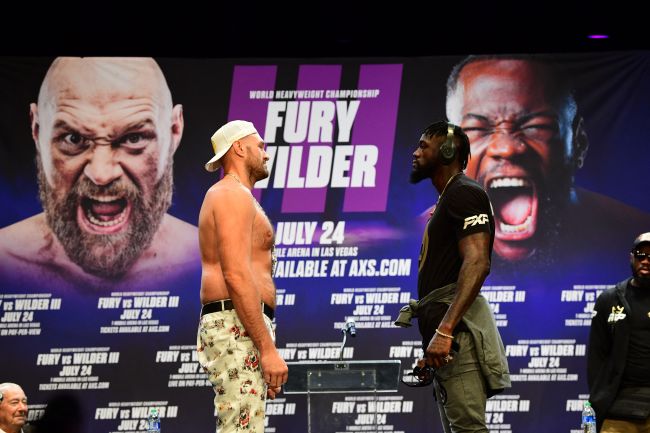 Tyson Fury and Deontay Wilder are set to fight for a third time next month and things got a bit weird during their media session on Tuesday.

During their pre-fight press conference, Wilder refused to answer questions from the media leaving Fury to answer nearly all questions ahead of the fight.

During the presser, Fury would mock Wilder and call him mentally weak for just sitting there with his headphones on and not answering questions.

“It shows how weak of a mental person he is, and I’m watching how the beating from the last fight has taken an emotional and physical effect on his life. I was worried about Deontay Wilder for quite awhile after the defeat that I’ve gave him”

After the press conference, Wilder and Fury stared at each other for over five minutes in one of the most bizarre staredowns in boxing history.

After Wilder ended the staredown Fury stayed on stage and gloated while calling his opponent a “pussy” for walking off early.

Fury and Wilder will conclude their trilogy on July 24th at the T-Mobile Arena.