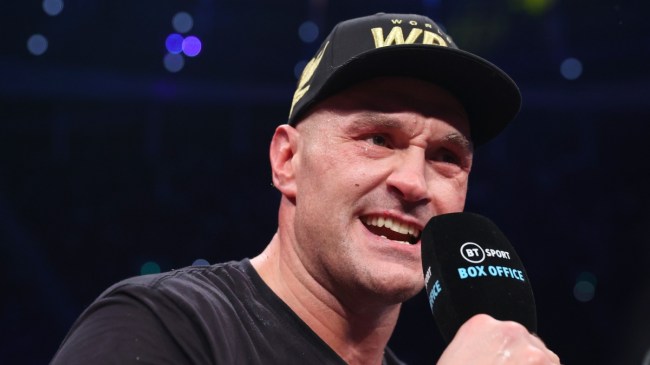 Fight fans have been on the edge of their seats waiting to see what Francis Ngannou is going to do now that he’s no longer under contract with the UFC.

The prospect of taking on Tyson Fury is very much in play. Especially now that the boxing star challenged the former UFC champ to a bizarre fight involving Mike Tyson.

Seconds Out Boxing shares a clip of Fury talking about a potential brawl with Ngannou. You’d think he’d challenge him to a regular boxing match. Instead, the parameters he set are so bizarre we can only assume he’s been thinking of this for a while.

💢 @Tyson_Fury challenges MMA superstar @francis_ngannou to a battle in the cage, with @MikeTyson as referee!

Four-ounce gloves, in a cage, with Mike Tyson refereeing. Is Tyson even a good referee? Knowing how often he uses weed and shrooms we’re not entirely sure if he’d be willing to sober up to ref a fight. Either way, if Francis Ngannou is down to fight Tyson Fury under these rules, then they need to shut up and take my money.

It’s no secret that Ngannou is seeking a big money fight or two. Especially considering Dana White claims the UFC offered him a deal that would have made him the highest-paid fighter in the history of the organization. Even so, it wasn’t enough. However, a bizarre brawl against Tyson Fury would probably reel in a ton of dough.

For now, there has been no response from Ngannou or his team. Hopefully, we hear from them soon, as Tyson Fury seems ready to go despite rumors of a matchup against Oleksandr Usyk.