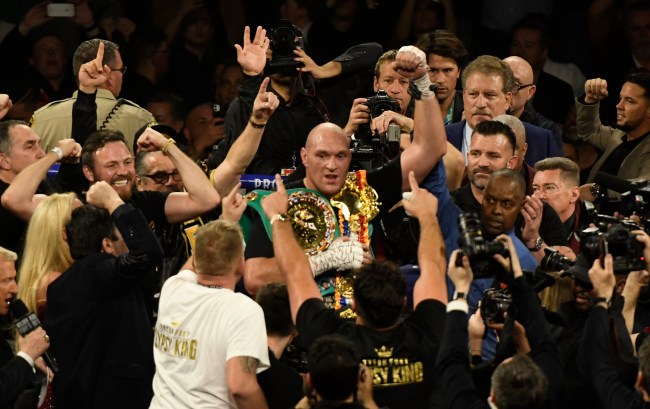 Even the title of World Heavyweight Champion isn’t enough to conquer the opponent in one’s own head, and there is no better evidence of this than Tyson Fury.

The Gypsy King publicized his struggles with mental health and drug addiction during his hiatus from boxing in 2016 and 2017.

He appeared on the Joe Rogan Podcast in October 2018 and revealed that he bought a brand new Ferrari convertible in the summer of 2016 and nearly used it to commit suicide. The 31-year-old Brit “got the car up to about 190 mph” before deciding not to launch it into a bridge.

In the wake of winning what was dubbed “the most compelling boxing match of the last 20 years,” a clip from 2019 during an appearance on “The Rich Eisen Show” began making the rounds again.

Re-upping for anyone who wonders where @Tyson_Fury gets the resolve and desire to overcome all.

Please share with anyone who suffers from mental illness. You too can be a champion. https://t.co/QUcy5pN2cs

Fury admitted that he grew up in a family wherein talking about mental health was a sign of weakness. This sentiment is not difficult to believe when you take one look at his father. Dude looks like he hasn’t cried since Ivan Drago went down.

Tyson Fury's father knew exactly how the fight with Wilder was going to play out.

Now all these guys have to call him and admit they were wrong.#WildervsFury2 pic.twitter.com/G5utz5mjiY

After seeking help to address his demons, Fury has used his new lease on life to help others. He donated his entire $9 million purse from his first fight against Wilder to homeless and mental health charities.

In December, Fury helped recalibrate a “random stranger” who showed up on his doorstep on the brink of suicide. Fury took the man on a three-mile run and talked through his issues— “it seems to have worked,” Fury said at the time.