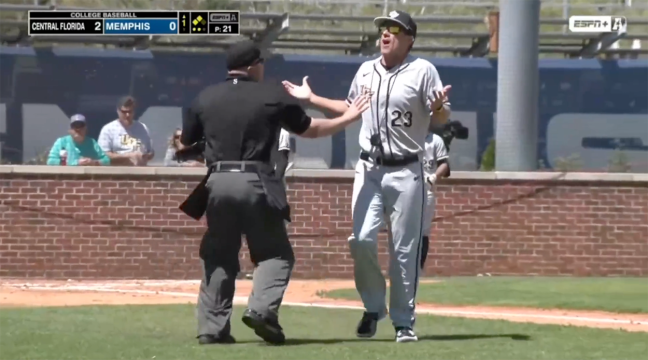 Things got extremely chippy during Sunday’s baseball game between Memphis and UCF. It was an utterly chaotic scene during a crucial moment of a series-deciding game.

The Tigers hosted the Knights for a three-game series in Bluff City over the weekend and after winning the first game 6-1, the home team dropped game two 3-13. As a result, the series was split and Sunday was the rubber match.

And then a wild situation involving pine tar proceeded to unfold between UCF and Memphis baseball.

During the top of the first inning, UCF catcher Andrew Sundean sent a towering three-run home run to left field and gave his team a 5-0 lead. At least for a moment, it did.

Memphis immediately challenged the home run, arguing that Sundean had used too much pine tar on his bat. The umpires proceeded to get together, measured the amount of pine tar, ruled in favor of the Tigers and called Sundean out.

The home run did not count, which of course sent UCF’s head coach Greg Lovelady into a frenzy. He ran from the dugout and immediately got in the umpiring crew’s faces and had to be held back from going to the Memphis dugout.

In turn, he was ejected.

As Lovelady exited the field, the Tigers pitcher started yelling at him and proceeded to get thrown out of the game. That caused the benches to clear.

The entire spat was not only bizarre, but rarely seen any level of baseball. And it only got even more strange when the umpires checked the rule book, overturned the out and allowed the home run to stand.

Sundean hit a 3 run HR for UCF. Was called out for too much pine tar on bat. UCF HC Lovelady declared game under protest. Then loses his mind gets tossed, Memphis pitcher talks shit. Gets tossed.

Then umpires reversed the call and the HR stood. pic.twitter.com/j35gYELhdc

The entire situation in Memphis was extremely reminiscent to George Brett’s famous tirade in 1983.

Brett, a Hall of Fame third baseman, hit a home run against the Yankees but had it ruled an out because of the amount of pine tar on his bat. In Brett’s case, however, it was not his coach who left the dugout and let his rage out on the umpires. It was he himself.

He saw the whole thing go down between UCF and Memphis on Sunday and took to Twitter to discuss the similarities. Or, in his case, the lack there of.

Brett got to the umpire crew first.

I beat the coach to the umpire

He was also surprised that pine tar is still a thing at all.

Did not think anyone used pine tar anymore.

Ultimately, just like what happened on the college level, Brett had the call overturned by the Commissioner’s office at a later date and the home run stood. On Sunday, UCF ended up winning the game 15-6 and the series 2-1, but Memphis declared the rubber match was played under protest, so there will be a review.