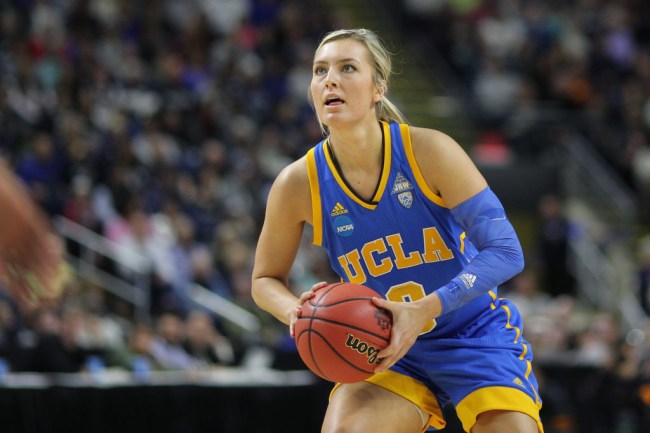 During UCLA’s game against Fresno State on Friday night, former UCLA basketball player Nicole Kornet spectacularly made a layup, a free throw, a 3-pointer and a half-court shot in succession.

Everyone in attendance and on the internet assumed Kornet, who averaged 7.7 ppg as a Bruin, won herself the usual prize for hitting all four shots, a brand new car. This assumption was reinforced by Kornet, who tweeted after the game, “I JUST WON A CAR. THAT WAS EASY.’

I JUST WON A CAR. THAT WAS EASY. pic.twitter.com/LICabfPgw2

A UCLA spokesperson wrote in an email obtained by ESPN that Nicole was never eligible to win a car.

“Nicole was selected to do the supershot game at halftime, but there was no prize on the line, and the game was not represented as such. They were aware all along that she was ineligible for any prize, as was Nicole. She did not sign a contract, and there was no mention of her playing for a car — or any prize — during the game.”

UCLA let Kari and I know beforehand we would not be receiving the car if we were to make the half court shot. They allowed us to participate in such a fun half time tradition and for that I am very grateful. It was an amazing birthday! I love being a Bruin!

I did not end up winning the car, but they warned me beforehand. UCLA did their job! I just don’t want them in the hot seat. Thanks for understanding!

THEN WHY’D YOU SAY YOU WON THE CAR IN THE FIRST PLACE, NICOLE.

As For The Win points out, Kornet’s status as an ex-UCLA basketball player automatically deemed her ineligible to win contest prizes, a tactic used by sponsors to reduce the chances of shelling out more than they’d like.

Because of the sums of money involved, companies like SCA Promotions carefully screen their contestants. If a potential participant has ever played professional basketball, or if he or she has played on the high school or college level within five years, the person is deemed ineligible. [via]

In the end, all Nicole received on her birthday for her shooting prowess was a viral video. Unfortunately, those don’t win you shit.