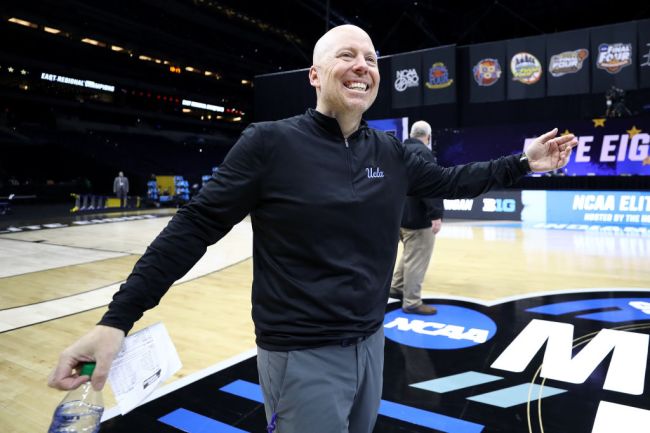 UCLA continued its magical run in the NCAA Tournament on Tuesday night with its 51-49 win over top-seeded Michigan. With the win, the Bruins became the first team to advance to the Final Four after playing in the play-in game to begin the tournament. It’s been quite the journey, and head coach Mick Cronin and his father, Hep, are loving every second of it.

Other than the Bruins playing very good basketball, Hep cheering on his son and his team has been another constant throughout the tournament. Every time the cameras pan to Cronin’s father, you can see how thrilled he is, even through his mask, and their interactions with one another have certainly become one of the top stories of March Madness this year, and rightly so.

Hep hadn’t seen his son in a year due to the pandemic, so seeing him lead the Bruins to the Final Four has to be even that much more special.

We were first introduced to Hep during UCLA’s comeback win over Michigan State in the First Four game.

Then, ahead of UCLA’s win over Abilene-Christian, WLMT out of Cincinnati did a feature on the Cronin family, and Hep talked about how great it has been getting to see his son.

Mick Cronin's dad and brother haven't been to his games in a year because of COVID-19. Now they get to watch Mick take UCLA to the Sweet 16. @WLWT @UCLAMBB #MarchMadness pic.twitter.com/5nd3i40JWI

On Tuesday night, we then got the classic shot of Cronin talking about his father as the cameras were set on Hep. Both the Cronin men seemed to be holding back tears.

Mick Cronin shares the importance of his father being at the NCAA Tournament. pic.twitter.com/NFBhb3WbnD

I think it’s safe to say that if Cronin and the Bruins can pull off the unthinkable, a tear-filled embrace will be had between the father and son, and America will love it.