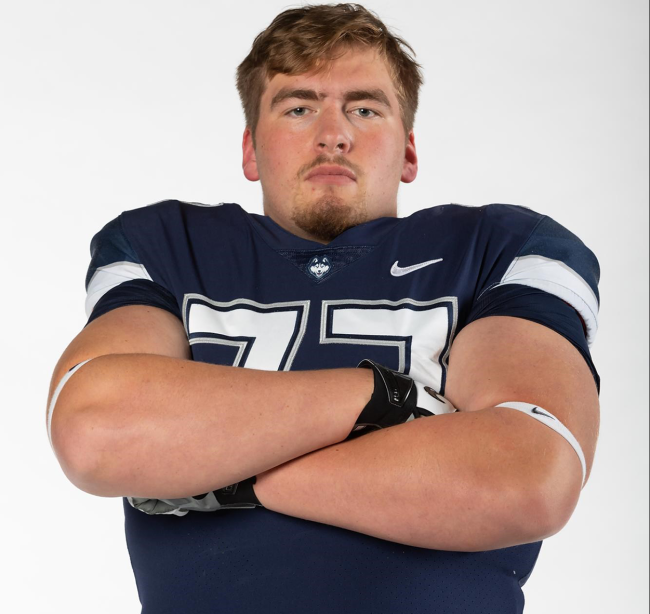 Ben Murawski is an absolute mammoth of a human being. The senior in high school stands 6-foot-6, 335 pounds with 11-inch hands and a size 18 shoe.

Murawski, who signed with UConn to play offensive line as part of the Class of 2022, will get to campus in Storrs this summer. He is obviously big enough to play the position on the next level, but his athleticism is what sets him apart.

At 6-foot-6, he would typically play at one of the tackle positions. However, he is so ridiculously quick and agile for his size, Murawski could play anywhere and has a real opportunity to step into the program and make an impact on day one.

His highlight tape is a thing of beauty, but fair warning — it might make you want a big ole stack of pancakes.

In addition to Murawski’s size, he is incredibly strong. He has benched 335 in the past and squats 500 pounds on a consistent basis.

As a result of his measurable and on-field play, the Pennsylvania-native received multiple offers from D-I programs. During his three years at St. Thomas More School in Connecticut, Murwaski was a three-year starter and earned First Team All-Conference and All-Area as well as Second Team All-State honors in his final season.

It’s easy to see why.

As he finishes up his senior year, before graduating and moving on to play for the Huskies, Murwaski is dunking on everybody. His high school coach recently posted a video of his soon-to-be former offensive line standout running fives on the hardwood.

In the video, Murwaski not only hits spot-up triples and shows some wicked handles, but he is simply flying through the lane and throwing down. Nobody at 6-foot-6, 335 pounds should move like he does. It’s ridiculous.

Not to many 6’7 335 pound humans moving like this! @UConnFootball has a special one with Ben Murawski! @johnmarinelli @CoachSammis @CoachJimMoraFB #STM pic.twitter.com/uOuAZCZOF3

Murawski will get to Storrs this summer and is set to be a force to be reckoned with in the trenches for years to come. The Huskies got a good one.