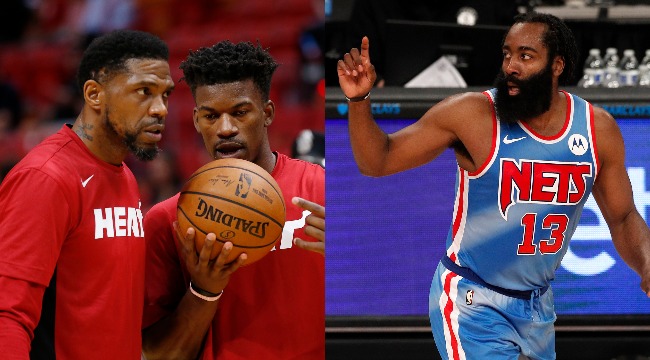 Long before glass backboards and three-point lines, there was Udonis Haslem.

At 127 years old, Udonis can wax poetically about the 1949 NBL merger of Sheboygan and Waterloo folding up into the BAA, a time when the league’s stars resembled chess champions and moonlighted as bootleggers for supplemental income.

For nearly two decades, Udonis Haslem has been the OG’s OG, with Heat president Pat Riley dubbing him “Mr. 305” and claiming he captivates the entire city of Miami, a franchise he’s played for since George W. began his first term.

Miami briefly dipped its toes in the James Harden sweepstakes, but quickly bowed out after realizing Houston would ransack Miami of its young stars and the clothes off its strippers backs.

Udonis, for one, was relieved.

"You can't bring James Harden to Miami… I would've aged 15 years trying to be his OG." 😂

Udonis Haslem kept it real on Harden coming to the Heat.

“You can’t bring James Harden to Miami. I would’ve aged 15 years trying to be his OG.”

At the time of this writing, Florida has the most strip clubs in the country with 243, they’ve also got five in Tampa and Miami that cracked Thrillist’s Top 21 nationwide list.Miami also landed number 2 on our list of James Harden’s Top Trade Destinations Based On Strip Club Metrics, with the closest titty bar within a half mile of American Airlines Arena.
It’s best Harden landed in Brooklyn, which specialize in Hipster Strip Clubs. Hard pass.