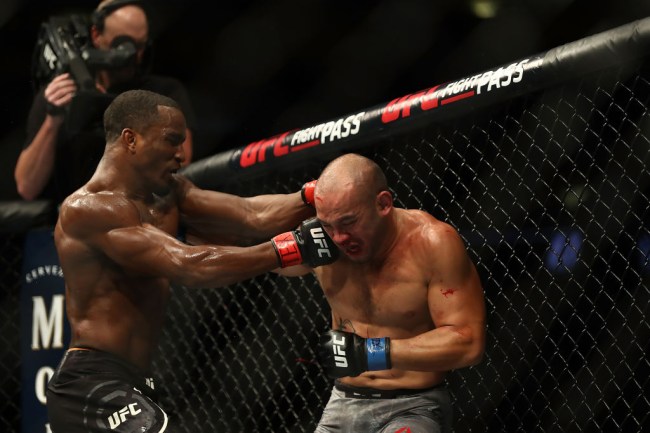 In the second round, the 28-year-old Neal delivered an explosive head kick on Camacho, sending him directly to the mat and ending the fight.

Goodnight! 👀 Geoff Neal with a brutal KO kick to end the fight! pic.twitter.com/tR8vB9hckt

After the fight, Neal said that he planned to deliver a head kick against Camacho after watching film on his opponent.

“As soon as I got the call about the fight with Frank Camacho, I looked at the film,” Neal said afterward. “And I saw him dipping to that side every time Drew Dober threw his left hand at him. I was like, ‘Coach, I think I can land this kick – I think this is the thing that’s going to knock him out.’

“So we worked on it the whole camp, and just (Saturday) we came up withi the code number for it – it was ‘Zero Zero.’ I started hearing my coach just yell, ‘Zero! Zero! Zero! Zero!’ Threw the kick, landed, knocked him out, and here we are.”

Neal also said that he wanted to end the fight in the first round because Camacho is known for wearing down his opponents and striking late in the match.

Thankfully, Camacho wasn’t seriously injured by the kick. He posted the following Instagram video from the hospital following the match.

A post shared by Frank "The Crank" Camacho (@frankthecrank)